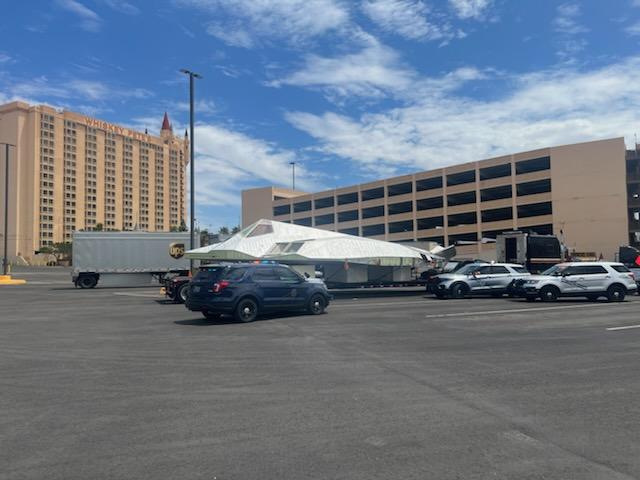 Castle Air Museum located in Atwater is proud to announce the arrival of the Lockheed F-117 Nighthawk Stealth aircraft to the Museum early this Friday morning, July 29th prior to dawn. The aircraft is scheduled to be offloaded at approximately 8 AM at the Museum's Restoration Hangar at 3040 A Street, on the Castle Airport complex. The Museum to date has the distinction of being the only air museum in Northern California to receive this aircraft, and one of a few museums across the nation with this distinction!
An interesting note is that, technically this aircraft and its 58 sister aircraft did not exist as far as the general public was concerned for over 7 years after its introduction! Many of the advancements made on the F-117 remain cloaked in secrecy to this day! The aircraft coming to Castle was one of the aircraft that were first to fight in the night skies over Baghdad Iraq on the first night of the air offensive during Operation Desert Storm in 1991.
Currently the aircraft is in Tehachapi, California and awaiting Highway Patrol escort over Highway 58 to Bakersfield and up Highway 99 to its final destination, the Castle Air Museum in Atwater California. At over 19 feet in width it is necessary to have Highway Patrol Escorts the entire journey, and allowed to travel over road at specified times only, per law enforcement. The aircraft is slated to begin the last leg of the journey at sunset this evening from Tehachapi to the Museum and due to arrive in the early morning hours for scheduled off load the Museums Restoration Hangar at 8 AM Friday morning July 29.
For more information on this historic event, please contact Joe Pruzzo, Executive Director at the information provided below.
--
Joe Pruzz
Executive DirectorCastle Air Museum209.723.2178 Main Ext. 304
209.201.8289 Cell209.723.0323 Faxwww.castleairmuseum.org