Gold Star Peak is 'Closer to Heaven'
A VFW member in Alaska led an effort to name a mountain peak in honor of Gold Star KIAs and their families, and since February, he has taken more than 120 families and veterans to its summit 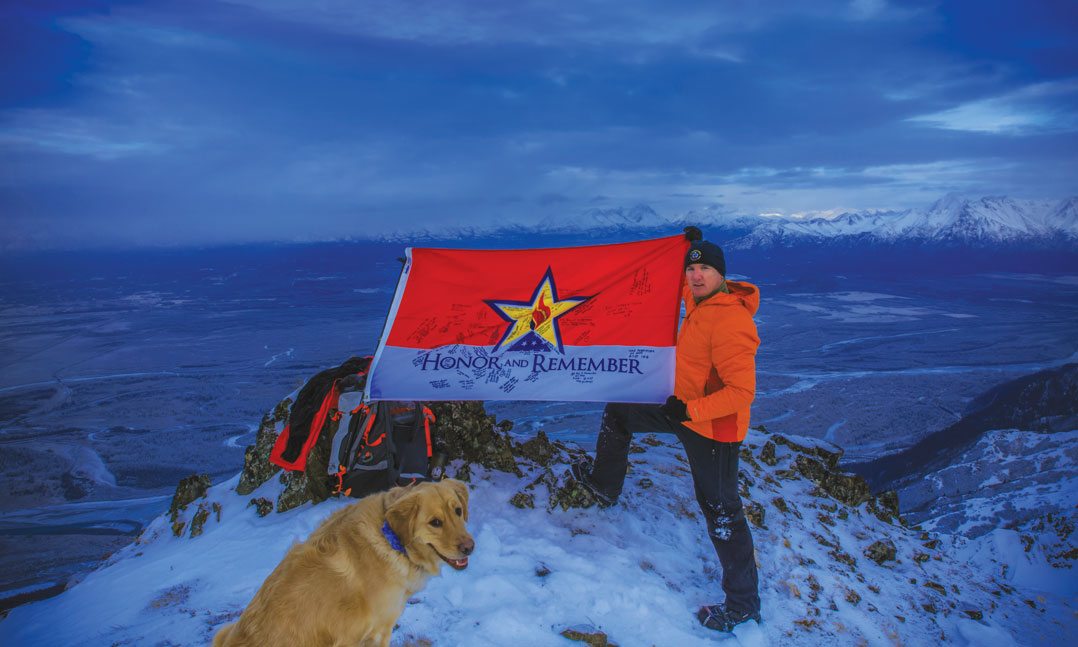 Kirk Alkire is not a medical professional in any sense. But the emotional moments he has witnessed atop mountain peaks in Alaska prove to him that climbing in honor of fallen service members is therapeutic.

One Gold Star father spoke of  his deceased son, a Marine, for the first time in more than 15 years as he hiked to the summit.

“This poor guy has been carrying this around, bottled up, since 2002, and we had no idea,” said Alkire, who led a mission to name an Alaskan mountain peak after Gold Star families. “We just figured this is who he is, and this is how he talks about [his son].”

Alkire, a Life member of VFW Post 9785 in Eagle River, Alaska, said it wasn’t the people who caused this father to open up.

“We were just a vehicle that got him there,” Alkire said. “But the process, the climb and then reaching the summit and seeing all the wonderful stuff that’s there… It’s a powerful thing. And, like I said, I have no certifications in mental health or anything, but I can tell you that these mountains — this mountain in particular — absolutely heals.”

A GOLD STAR CONNECTION
Alkire, who served in Iraq from 2006-07 with the 2nd Bn., 377th Parachute Field Arty Regt., 4th Brigade Combat Team, 25th Inf. Div., as a fire and battery 1st sergeant, said the idea to name a mountain peak came to him about two years ago while reaching the summit of Mount POW/MIA, which sits north of his home in Eagle River.

It was after the deaths of his fellow soldiers during his last deployment that Mount POW/MIA took on a “completely new meaning.” On Jan. 20, 2007, insurgents attacked Alkire’s unit in Karbala.

“They killed one of my guys instantly, then took four others hostage, or prisoner,” Alkire said. “[The insurgents] took them out into the Iraqi countryside as we were giving chase, and they knew we were on to them. So they pulled over, took my guys out of the vehicle and executed them on the side of the road.”

When Alkire returned to Alaska, he climbed Mount POW/MIA again. It was while standing atop the summit that day about a year and a half ago that he decided to do more for “his Gold Stars,” the five men who died in Iraq.

“I’m very connected to my Gold Stars from this incident, as well as many other Gold Stars,” Alkire said. “I just thought that I needed to do more. I came up with the idea that naming an unnamed peak right next to [Mount POW/MIA] to honor them — all of them — would be appropriate.”

THE NAMING PROCESS
Selecting a neighboring peak to Mount POW/MIA — which is about 30 miles north of Anchorage — had a “much more special meaning” to Alkire. This was partially because relatives of missing or unidentified service members can become Gold Star families due to “advanced technology” that identifies remains.

It is important for a mountain peak to honor Gold Star families, according to Alkire, because “no one has given more” to the nation than they have.

“Whatever I had to go through to do this in signatures and talking to politicians is nothing,” Alkire said. “It’s just nothing compared to what they have gone through, the sacrifices they have made.”

Alkire had to garner “public support,” which could come in the form of news articles, petitions and resolutions, as part of the naming process through the U.S. Board on Geographic Names. He started gathering information in June 2017 and had his first hearing in December 2017.

“By the time it was done, I had a couple thousand signatures from all over the country,” Alkire said.

After receiving approval in Alaska, the naming request was forwarded to Washington, D.C. A unanimous vote in favor of the new moniker came on Feb. 8.

“From there, it just started picking up so much more traction, which led to us starting a nonprofit that is geared toward helping veterans and survivors reach the summit,” Alkire said. “Not only just the summit because it’s not just about climbing Gold Star Peak, but just getting veterans and survivors out in nature to honor and remember our fallen in an attempt to bring healing to all.”

A ‘LIBERATING’ EXPERIENCE
As of August, Alkire and a team of guides have taken more than 120 Gold Star families and veterans to the summit. The 23 hikes have covered 82,000 vertical feet.

“Every single time we reach the summit,” Alkire said, “it’s a powerful moment for that person, that survivor.”

Sy Bulaong-Ramirez, who currently is stationed at Joint Base Elmendorf-Richardson in Anchorage, Alaska, with the 725th Brigade Support Battalion, hiked to the Gold Star Peak in June to honor her husband, Sgt. Reyes Ramirez. He died June 17, 2006, in Ramadi, Iraq, when an improvised explosive device went off near his Humvee.

He was 23 years old, and served with the 40th Engineer Battalion out of Baumholder, Germany. Reyes is buried in Texas, and Bulaong-Ramirez said she has “never really had a place to go” to remember him.

Though Bulaong-Ramirez said she did not know what to expect on the two-and-a-half-hour hike, it was “inviting” to remember her husband.

“It’s my first time hiking, my first time ever doing anything that has anything to do with Gold Star [events],” Bulaong-Ramirez said. “I had always been nervous, always had anxiety to go to any kind of event.”

The whole experience was “liberating,” according to Bulaong-Ramirez. And when she reached the top of Gold Star Peak, she felt “a bit closer to heaven.”

“I really felt that there was healing that took place during my time of the hike,” Bulaong-Ramirez said.

The hike also served as an “icebreaker” for Bulaong-Ramirez and “breached” the denial she has felt since her husband’s death.

“I’ve been pretty much a hermit ever since the event, and this one is the only [activity] that really motivated me to go do something,” Bulaong-Ramirez said. “That’s a really big deal for me.”

The next leg of Alkire’s mission is to have a Gold Star monument built at the summit of Gold Star Peak and another at a location for “non-climbers.”

This article is featured in the November/December 2018 issue of VFW magazine, and was written by Kari Williams, associate editor, VFW magazine.