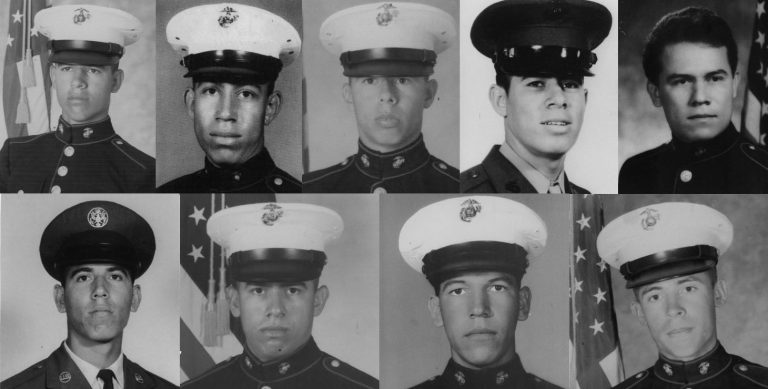 National Hispanic Heritage Month honors those who have positively influenced and enriched the U.S. and society.

For the Fuentes family, that means celebrating the nine brothers who served in the military. Brothers Alfonso, David, Enrique, Ezequiel, Ismael, Marcos, Richard and Rudy all served in the Marine Corps, while Israel served in the Air Force.

Hailing from Corpus Christi, Texas, the Fuentes parents had 16 children: nine sons and seven daughters. The parents worried about the children but supported their decisions to enlist.

David was the first to enlist, joining the Marine Corps in 1957. According to his siblings, other students teased David in high school, calling him a “mama’s boy.” When one of David’s cousins—a Marine—came home on leave, he talked to David, who convinced him to join. That started a tradition that followed through all nine of the brothers.

Most of the brothers have used VA over the years, including receiving health care at VA Texas Valley Coastal Bend Health Care System.

Each of the brothers had different reasons for serving.

“My plans were to quit school and join the Marines to get away from home,” Ismael said. “A friend of mine told me he would do the same. We went to the Marine recruiting office one weekend and were told we were the two highest ranking officers in Navy Junior ROTC, graduate with honors and we will place you both in our 120-day delayed buddy program. We both graduated June 2, 1968, and were in San Diego June 3.”

Another brother said his reason was to possibly spare his children from going to war.

“I volunteered to go to Vietnam,” Richard said. “My thoughts for volunteering is that when I would have a family, I could tell my kids that I already went to war so they wouldn’t have to.”

Echoing that sentiment, another brother said he served to possibly spare his brothers from going to war.

The youngest brother said he felt compelled to follow his brothers’ examples.

“Being one of the youngest of nine brothers, I did not want to be the one to break tradition, so I enlisted in the Marine Corps and followed in my brothers’ footsteps,” Enrique said.

Alfonso served in the Marine Corps from 1973-1979 as an infantry rifleman. He served at a Reserve unit in his hometown of Corpus Christi. He also deployed to Rome for training.

David didn’t get teased again after he came home on leave in his Marine Corps uniform. He worked on helicopter engines, assigned to the former Marine Corps Air Station El Toro in California. David served from 1957 to 1960. He passed away June 15, 2011.

Ismael served in the Marine Corps from June 1968 to June 1972. He served at MCB Camp Pendleton as a cook. After dislocating his shoulder, he transferred to the correctional services company.

Marcos joined the Marine Corps under the delayed entry program Nov. 10, 1976—the service’s 201st birthday. He served from June 1977 to August 1982, serving at a motor pool unit in MCB Camp Pendleton and a Reservist with the 23rd Marine Regiment.

Richard served in the Marine Corps from 1966-1970. He served with Marine Helicopter Squadron 463 in Vietnam from July 1968 to December 1969. He served in Danang and Quang Tri as a CH-53 Sea Stallion door gunner and as a maintainer on helicopter engines.

Rudy served from January 1972 to February 1977 as military police, transport driver and weapons instructor. He volunteered five times to go to Vietnam, getting denied all five times. He assisted during the 1975 evacuation of Saigon.