Honoring those who sacrificed 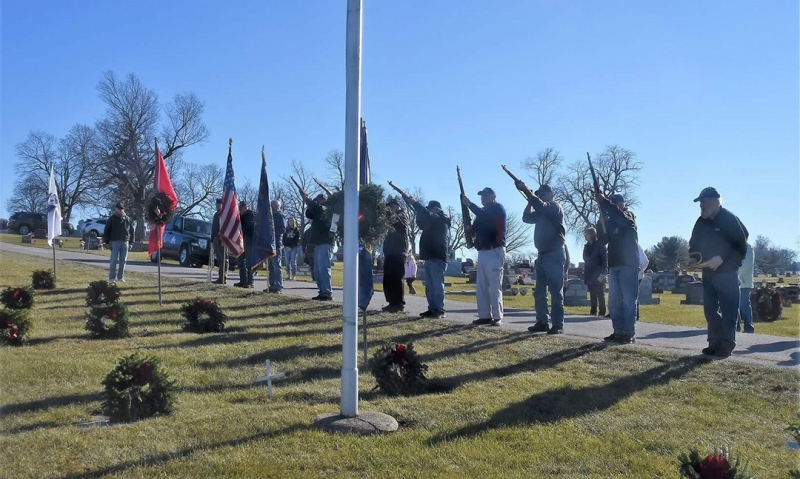 While the Department of Wisconsin American Legion Family – led by its District 8 American Legion Riders – were leading an effort that placed more than 7,200 wreaths on one of the state’s veterans cemeteries, American Legion posts across the nation were either leading or taking part in Wreaths Across America events in their own communities.

The following are just a sampling of the American Legion Family’s involvement in the 27th annual Wreaths Across America day.

• American Legion Post 9 of La Junta conducted Wreaths Across America events at both Fairview and Calvary cemeteries in La Junta.

• Colorado’s District 7 Legionnaires helped support an event at Memorial Gardens in Colorado Springs. According to KOAA-TV, Joseph Schmidt – historian at Post 209 in Colorado Springs – said it’s important to remember those buried at the cemetery. “You die twice. Once when you breathe your last breath, and then the second time when they forget your name,” Schmidt said. “So, we always make sure to say the name of each veteran out here at the cemetery so that they know that they’re remembered.”

• American Legion Post 50 put its own stamp on Wreaths Across America, placing wreaths on veterans memorials across Ansonia. “In our own mini-version of Wreaths Across America, we mean to capture the essence of its spirit, which is to remember our deceased comrades during the Christmas and holiday season,” Post 50 Adjutant Pat Henri told the New Haven Independent.

• In Meriden, approximately 50 people attended a Wreaths Across America ceremony at Walnut Grove Cemetery sponsored by American Legion Post 45. Auxiliary Unit 45 member Georgetta Sharpe led a short memorial service before people began decorating veterans’ graves. “We are here not only to remember their deaths but also their lives,” said Sharpe, according to the local Record-Journal.

Hundreds turned out for the fifth annual Wreaths Across America Cemetery at Highlands Memorial Park in Ocala. The event was organized by Eddie Jaworski, a member of Al Krietemeyer Memorial Post 284, while fellow Post 284 members assisted with the ceremony.

Jaworski told the Ocala Star-Banner that 2,038 wreaths were sponsored this year, the largest number to date locally.

State Sen. Dennis Baxley was one of the speakers at the ceremony, which included a ceremonial wreath laying at the flags of each branch of the military. The Post 284 Honor Guard gave a gun salute before volunteers began placing wreaths.

Dozens of volunteers took part in the wreath-laying effort at Graceland Cemetery. Baty-Tucker Post 168 in Knoxville was able to gather more than 210 wreaths to place on the graves. Wreaths with miniature American and service flags were also put at the base of the flag poles, along with the banners of all the branches of the service.

American Legion Post 144 and other community members placed wreaths at the graves of veterans at Cudworth Cemetery. A wreath was also tossed to the North River from the Sgt. Michael J. Kelley Bridge to honor the Army National Guardsman killed June 8 when his helicopter landing zone came under enemy fire in Shkin, Afghanistan, in 2005.

American Legion Post 141 in Claremore organized a community Wreaths Across America event that placed 1,000 wreaths on the graves of veterans buried at Woodlawn Cemetery. Guest speakers included State Rep. Mark Lepak, County Commissioner Ron Burrows and Mayor Bill Flanagan, while Post 41 Legionnaire Ray Watts presented a specially decorated wreath to a local Gold Star Mother and her sons. According to the Claremore Daily Progress, Watts wrapped an arm around the older son’s shoulder and asked all the veterans present to raise their hands. He told the boys that while these men didn’t know their brother personally, their shared oath to the United States meant they were all brothers, so if the boys ever needed anything, they need only call on one of those men.

According to the Spartanburg Herald-Journal, members of Trail Life USA Troop 2331 also helped place wreaths, including on the graves of World War II veterans Arthur E. Turner and James Wilbur Woodfin, who served in the U.S. Air Force and U.S. Coast Guard.

American Legion Post 242 in Sandston raised over $9,000 to buy the wreaths so each of the 1,244 graves at the Seven Pines National Cemetery would have a wreath for the holidays.