Marine program could get more troops off the battlefield alive 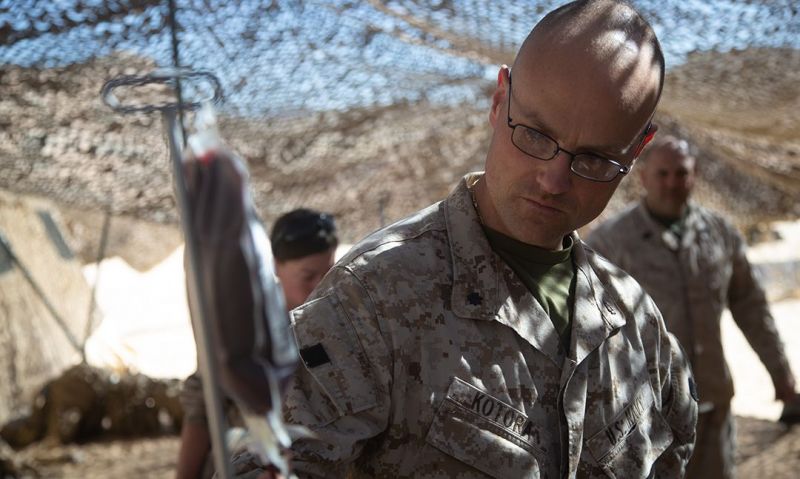 "Corpsmen are tasked with the grim reality of either restoring a person to life or taking them to their final resting place."

Those were the words of Lt. Cmdr. Russell Wier, deputy division surgeon for the 1st Marine Division, as he explained the genesis of Valkyrie, a fresh whole blood transfusion initiative he is presently spearheading, designed to get more troops off the battlefield alive.

Marines are often charged with going on dangerous missions where some lose their lives, but they're not alone – Navy corpsmen go on these missions with them, playing a guardian angel role.

"The number one killer on the battlefield is massive hemorrhage," Cmdr. Joseph Kotora, division surgeon for the 2nd Marine Division, said. "Right now we use a junctional tourniquet and it does a good job as long as we don't move the patient, but patient movement is a battlefield necessity."

Wier, who twice deployed to Iraq as a casualty evacuation pilot, would agree with that sentiment. He recalled a tragic incident in 2007 when a CH-46E was shot down while transporting urgently needed blood to a remote surgical facility. It resulted in the loss of five Marines and two Navy corpsmen aboard the aircrew. The event underscored the importance of having blood available far forward in the battle space. As a physician 10 years later, Wier became aware of the possibility of conducting walking blood bank operations at the small-unit level. Realizing the life-saving potential there, he committed to bringing fresh whole blood transfusion to the Marine Corps. And the Valkyrie program was born.

Wier began developing the Valkyrie program in 2017. "The ultimate goal is to make it a program of record in the Marine Corps, which will change the way Marines and corpsmen operate in future wars," he said. "Right now, we're implementing it across the 1st Marine Division, Cmdr. Kotora and his team are beginning to implement this across the 2nd Marine Division, and we're working with a team within the 3rd Marine Division to start establishing trainers on Okinawa, too."

Fresh whole blood transfusion is not a new concept; it dates back to World War I and World War II, Kotora said. "We got away from this sort of treatment during Vietnam because we outstripped the blood bank supply and had to start breaking up blood components," he said. "But what is old is new again, and as we learn more about trauma and what the body needs to combat trauma, we recognize that fresh whole blood is the preferred fluid for resuscitation."

Other branches of the military have already begun bringing fresh whole blood transfusion back to life. The Army's 7th Ranger Regiment successfully began fielding their own program in 2015, which also is designed to reduce the number of hemorrhage-related deaths by replacing junctional tourniquets with the transfusion of fresh whole blood to soldiers on the battlefield.

"Special Forces have been doing this for years," Kotora said, "so we thought, 'why not us?'" It was a valid question: Why not the Marines?

Thanks in no small part to Wier's and Kotora's belief and persistence, the 2nd Marine Division has been given the opportunity to notionally test fresh whole blood transfusion during Marine Air Ground Task Force Warfighting Exercise I-20. It was a division-scale, unscripted, force-on-force exercise, within which a select group of corpsmen were immersed in an intensive four-day program and learned how to perform fresh whole blood transfusion in a tactical field environment. Notional casualties are certain in this exercise, and this kind of training gives the corpsmen the opportunity to test their newfound skills in a lifelike scenario.

Various aspects of trauma need to be treated during a massive hemorrhage, and that's why fresh whole blood is the preferred resuscitation fluid. It has clotting factors, acid binding, oxygen transportation capabilities and it is warm, which addresses the hypothermia aspect of trauma. It replaces what the body is leaking out in a way that separated components or saline cannot.

"Not only is fresh whole blood transfusion the most effective form of resuscitation, it is also the cheapest," Kotora said. "Whereas one unit of stored whole blood is about $180 on the civilian market, we are able to safely collect that same amount of blood from a fellow Marine at a fraction of the cost. And because it is drawn fresh from the donor, on-site, it is more effective than stored blood."

There is no additional cost to train the corpsmen because their salary is already paid. The only additional cost is the price of the transfusion kits, which are about $120 per kit. It requires two or three of the kits, plus some additional equipment, to outfit corpsmen. That translates to about $400 per corpsman on the battlefield. "I think one would be hard-pressed to find medical interventions for that price that are going to be as fruitful in saving somebody's life," Kotora said.

The transfusion process would start about four months prior to deployment. A blood drive is conducted, which allows physicians to identify individuals with a specific type of blood: disease free, low-titer (a low antibody count), Type-O blood. If the potential donor meets certain criteria, they will be placed on the unit's blood roster and ultimately receive a card that identifies them as a qualified donor. Kotora said under the program each corpsman would know which Marines in their platoon are on the donor roster, which squads they are in, and where these individuals could be located at any given time.

For the more dangerous missions, where casualties are all but certain, blood can be drawn in the field and refrigerated in field-expedient coolers for 48-72 hours. "We wouldn't take blood to the field just to have corpsmen wait for weeks or months before they use it, and that's why we need the option to draw blood on site, right before a mission, for transport on the backs of corpsmen. That's the ultimate goal we're working toward," Kotora said. "The major risk involved with this procedure is bodily rejection of the transfusion, which is almost always due to clerical error, meaning the wrong blood type is administered to the patient. So we mitigate this by only drawing Type-O blood – the universal blood type – and then we ensure that it is tested, re-tested and then tested again."

Kotora believes the program will not want for blood donors. "I never see an issue with having enough blood," he said. "The esprit de corps of being a Marine, and the unit comradery that Marines feel, is more than enough to make them want to contribute. Once they understand what this program is, how it helps the individual Marine, and that they could be the recipient of blood one day, it really gives them a vested interest in the program."

Marines and sailors are more likely to be bold and daring on the battlefield when they know there is a greater chance of survival if something goes wrong. The Valkyrie program gives them the confidence they need to be aggressive and complete the mission. "We don't know exactly how many people this will save because every injury is different, but we do know that we will save a lot more people with it than without it," Kotora said.

The name of the proposed Marine Corps program – Valkyrie – is drawn from Norse mythology. "Valkyries were these angels of war that soared over ancient battlefields and gathered the fallen. They manifested the capability of restoring the warrior to life or shouldered the responsibility of transporting them to Valhalla," Wier said as he explained the genesis of the program. "I liked the imagery of it ... that presence on the battlefield alongside the warrior. I think this program enhances our corpsmen's capacity to restore life."