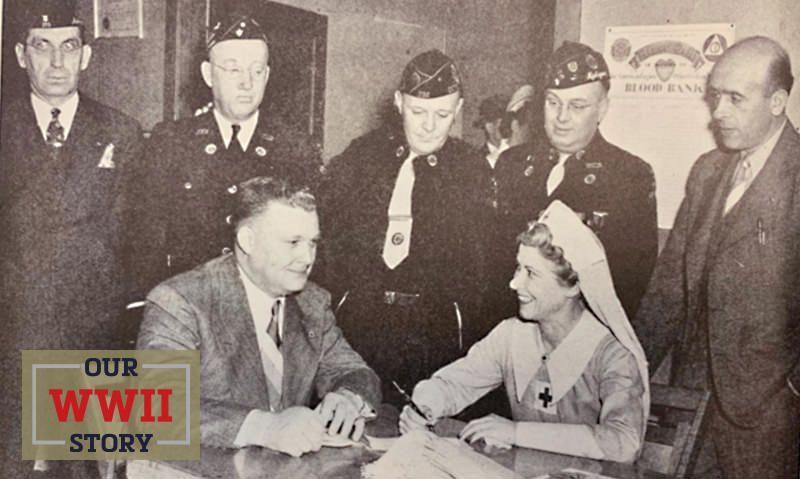 By 1943, The American Legion’s blood-donation program was institutionalized in multiple cities across the country, fulfilling needs locally and in support of military personnel at war. Following deadly race riots of June 1943 in Detroit, the American Legion Civilian Defense Blood Bank there was credited for acting quickly and effectively amid the bedlam.

“Much of this blood plasma was delivered while rioting was at its height,” explained George C. Dollar, chairman of the American Legion Civilian Defense Blood Bank in Detroit. “It was delivered through streets filled with overturned cars; through flying missiles and showers of glass from broken windows, and through the picket lines. Because we were driving our white emergency unit cars of The American Legion Civilian Blood Bank unit, we were permitted to proceed without being attacked by the rioters or stopped by the police.”

Area hospitals called on the bank for 512 units of plasma, most of which was reportedly used to treat citizens who had gotten caught up in the rioting that claimed 31 lives and injured hundreds of others.

Detroit-area American Legion posts had established the blood bank at Henry Ford Hospital in March 1941 for “the purpose of serving veterans, indigent and emergency cases,” according to an article in the September 1943 American Legion Magazine. More than 2,500 Legionnaires and American Legion Auxiliary members regularly donated to the bank to keep it well stocked in case of emergency.

Similar American Legion blood banks were operated in Boise, Idaho, and Brooklyn, N.Y., serving the civilian and military communities there. In other cities, including Detroit, The American Legion worked as the primary blood-distribution hub for local medical institutions and emergency services.