Paratrooper: Following in my Father’s Footsteps 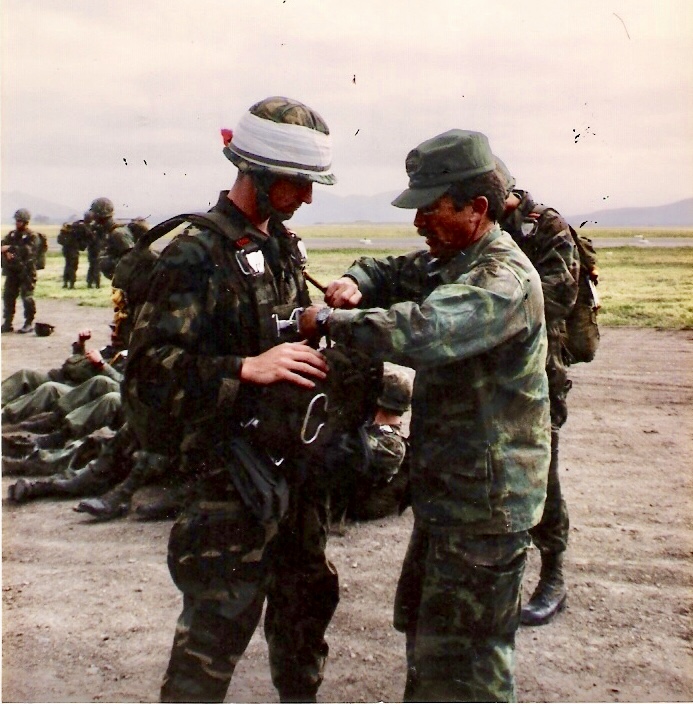 I looked up into the big, blue sky. Far in the distance, I spotted a C-130 Hercules headed towards the open grass field I waited in. For a few moments, I watched as the plane continued in my direction; suddenly, from the tail-end of the aircraft, paratroopers jumped out into the open air. The parachutes expanded sideways as they became caught in the wind and fully inflated, pulling the soldiers swiftly with them. Dozens of troops poured out of the fuselage and descended to the ground. I saw the first jumper hit the grass and quickly sprinted to him.

“Dad?” I asked.  “No kid, your dad is still coming down; we put a white band on his helmet so you could recognize him.” Looking up, he extended his arm and pointed to a spot about 200 feet in the air at a fast descending grunt with white sports tape lining the outside of his helmet. “There he is.”

I was 4 years old when I ran towards my father and reached him as he hit the drop zone. In BDUs and Army equipment, he was a green giant towering over me. As he bent down to collect his parachute, I started helping him pick up the soft, shiny, green canopy. “Wow!” I exclaimed. “I wanna jump out of airplanes when I grow up!”

“Maybe one day you will, son,” he smiled.

Several years later, I found myself at Fort Bragg, North Carolina. “Hey, Hansen, formation is at 0500. If you forget your air-items, I’ll smoke your ass in the front-leaning-rest position,” my squad leader warned. “Roger, sergeant.” My buddy and I walked towards our rooms after being released. “This jump is gonna suck. There’s supposed to be high winds and cold temperatures,” my squadmate complained. “If it doesn’t suck, this isn’t the 82nd Airborne.  Ah, I love it,” I sarcastically replied. “Livin’ the dream.”

I arrived at the company the following morning. We loaded onto large, white buses and headed to Pope Air Force Base. Our battalion went through the pre-jump rituals, using C-130 mock doors, required before all airborne operations - obeying jumpmaster commands, proper exit, proper parachute landing fall, etc. Later, we entered the “pax shed,” a large open bay, donned our parachutes and transformed into paratroopers. After the Jumpmaster Personnel Inspection (JMPI), we waited. And waited. And waited. Hours passed until we got word the engine issues stalling our departure were fixed and the planes were ready for take-off. The show was about to begin.

We approached the C-130 and boarded using the rear ramp. The propellers spun furiously, blasting us with a continuous stream of hot wind while we loaded up (which we welcomed on this frigid day). As our group packed in, I found a spot on the red, cargo-net jump seat in the middle of the aircraft. I would ride “inboard” today before jumping. We continued to cram into the plane until 64 of us were tightly squeezed into its big, grey belly; the ramp closed and the pilots began the taxi for takeoff. The guy in front of me was using an empty Gatorade bottle to spit his tobacco dip into. I made eye contact with him and he passed it to me. I made my contribution and passed it to my squad leader. The bottle continued making its way to the rear of the plane, each soldier taking his turn. The engines roared as the pilots increased the throttle, and our bird took flight.

A few feet away from me a private was sweating profusely and dry heaving. A crew member passed him a vomit bag which he immediately hyperventilated into. As we climbed higher and higher, he breathed harder and harder. Before we reached cruising altitude, he puked. Laughter swept through our section of the plane. “Five-jump-chump!” my team-leader yelled. “Cherry!” I shouted. A “five-jump-chump” is someone fresh out of Airborne School, with no jumps in Division. To receive your parachutist’s wings, you have to complete five jumps from an aircraft. Until you’ve jumped 10 times, you’re considered a “cherry”- a new guy, a fresh, untested, inexperienced virgin to the ways of the Airborne.

As we approached the Drop Zone (DZ), the jumpmasters shouted directives at us to get ready to jump. “Hook up!” We grabbed our static lines and hooked them to the anchor cable (steel cables suspended about a foot above our heads, running the length of the cargo bay). The Air Force loadmasters opened the paratroop doors and violent wind rushed into the plane. Heavy turbulence knocked jumpers off balance - it was almost go time.

There was a nervous looking butter-bar lieutenant standing next to me. I patted him on the shoulder. “Hey, sir!” I yelled in his ear. He looked back, “What’s going on?” he asked. My squadmate saw me talking to the lieutenant and listened in, smirking. “There’s a small piece of canopy hanging out of your pack tray. I wouldn’t jump this.” A look of horror came over him. “Can you fix it?” the butter-bar pleaded. “Negative, sir. I’m not a chute rigger.” As the lieutenant’s trepidation increased, my buddy chimed in, “Your parachute’s screwed, sir, but you’ve got a reserve. You’ll be fine.” I reflected briefly, wondering if my father’s generation of paratroopers enjoyed messing with junior officers as well - I’m sure they did.

“30 seconds!” The jumpmasters yelled. The Gatorade bottle made its way back to me. It was now about a quarter full of brown, slimy dip-spit. I used it once more and passed it forward. The small, circular light next to the doors changed from red to green. We were over the DZ.

“Go!” The jumpmasters screamed. One by one, doing the Airborne shuffle, the paratroopers handed their static lines off to the jumpmasters. After he took the lines, the troopers faced right and vigorously jumped from the aircraft. I watched as all the outboard jumpers exited the C-130 - all but the last one. The soldier, a private, handed off his static line, turned to the door, and froze. The jumpmaster had turned the opposite direction to collect the used lines. When he looked back, he saw the private standing in the door. “What the hell?!” he exclaimed. The private shouted back “I’m not jumping, sergeant! I refuse to jump!” Within a second of the private’s response, the jumpmaster (sergeant) grabbed the static line anchor cable with both hands, yelling over the roaring wind “GET THE HELL-,” he lifted his feet and slammed them into the private “-OUT!!!” kicking him out of the aircraft. There was no room for the faint of heart on this plane.

Inboard personnel headed for the door. Gripping the static line in my left hand, with my arm fully extended, I made eye contact with the jumpmaster, handed off my line, faced right 90 degrees and jumped out the door. I was immediately smacked by the wind. Keeping my feet and knees together and my chin to my chest, I counted in my head “One-one thousand, two-one thousand, three-one thou-” my parachute canopy deployed and violently spun me around. After a couple of seconds, I was able to get the parachute cords untwisted and look up at my canopy. My parachute was fully inflated; I had made a good exit and cleared the plane.

My descent towards Sicily DZ was underway. I looked at the other soldiers descending and caught a glimpse of a jumper above me, oscillating back and forth, very close to my canopy. Being that close in the air could result in entanglement, followed quickly by our chutes deflating. The paratrooper - a private, with little jumping experience - swung outward, then inward again, and stopped about two feet away from my face, his parachute canopy now touching mine. I looked at him and shouted, “Slip away, dumb-ass!” Distraught, the soldier quickly grabbed his rear risers and pulled as hard as he could. His parachute cleared mine and he began heading away from me. I pulled my risers and made extra space between us; I could now focus on landing.

Looking down, I could see the ground quickly approaching. Ensuring my feet and knees were together, legs slightly bent, I looked back up and stared at the horizon, trying not to anticipate my landing. I could feel the cold wind on my face and pulled the risers on my parachute, into the wind, attempting to reduce my velocity. My body collided with the ground - I took a second to process the impact, but everything was okay. I stood up and took a few steps - any jump you can walk away from is a good jump.

I collected my parachute and headed over to the turn-in point. Making my way to the logistics trucks, I passed a paratrooper being treated by medics. He was writhing in pain and bemoaning a broken ankle - he had a bad jump.

I looked up into the big, blue sky; a cool breeze brushed across my face. I saw another C-130 approaching. Paratroopers poured out the back and slowly drifted towards the earth. I remembered being a child, two decades earlier, waiting on a DZ and watching my Dad jump out of a perfectly good airplane. Patriotism, a desire for adventure, and a deep admiration for my father had lead me to this moment.  We all have dreams about what we want to be when we grow up, but not all of us realize that dream. I was an airborne infantryman, following in my father’s footsteps, and livin’ the dream.