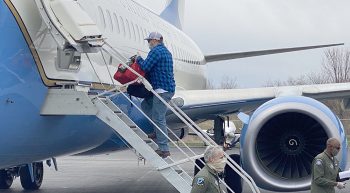 In the photo above, Matt Hamel of VA Maine Healthcare System boards a plane for a flight from Portland, Maine, to New York City. There, he’ll begin a 14-day deployment to support VA COVID-19 response operations.

“They have left their friends and family here in New England to support colleagues in New York and bolster our COVID-19 teams at VA medical centers in Boston and Bedford,” said Ryan Lilly, the VA New England director.

“Their dedication, courage, commitment and selflessness deserve our deepest admiration and gratitude. Their service to our nation’s Veterans is saving lives and making a difference. We are proud of each of them.”

A rotation of VA New England volunteers has left each week to resupply VA’s New York City response with much needed clinical and operational support. Several signed up for a second 14-day shift.

On Sunday, more staff flew on a Department of Defense jet from the Portland International Jetport in Portland, Maine, to New York.

VA New England is also reinforcing the response teams within its network; demand in the Boston area is also high. In the past few weeks, teams of more than 60 staff members from VA New England’s medical centers in Vermont, Maine and Central Western Massachusetts were sent to VA Boston and the Edith Nourse Rogers Memorial Veterans Hospital in Bedford, Mass.

All are volunteers as part of the Veteran Health Administration’s Disaster Emergency Medical Personnel System (DEMPS).

DEMPS is the VHA’s main deployment program for VA’s workforce to assist in a federal emergency or disaster zone under a Presidential Disaster Declaration.

On Sunday’s flight were a nurse practitioner, an emergency department nurse, a medical support assistant and a housekeeping aide. A fifth person, a primary care physician, drove to New York April 24.

The four VA Maine employees boarded a jet with “United States of America” written across its body and an American flag affixed to its tail. Before boarding, military personnel checked their temperatures.

One of them was Matt Hamel, a housekeeping aide who served eight years in the U.S. Army. His service included a deployment to Iraq and two deployments to Afghanistan.

Hamel works in Environmental Management Services at the VA Maine Healthcare System in Augusta, Maine. His duty in New York will include cleaning and sanitizing the COVID-19 area at the James J. Peters VA Medical Center in the Bronx.

“I’m a Veteran. For me, it’s a call to duty,” said Hamel, who lives in Chelsea, Maine. “It’s just another deployment for me. There’s just something inside, a driving force, that says, ‘Go help.’”

Other volunteers from New England have also mentioned the importance of serving their country and answering the call for help.

Mark Zacheis is a registered nurse from the Edith Nourse Rogers Memorial Veterans Hospital. He went to New York for a 14-day deployment. He plans to help his colleagues when he returns to the VA medical center in Bedford.

Zacheis said his time in New York was intense. Now, he will use the knowledge he gained and his experience to help save lives in Massachusetts. The Army Veteran said operations have been 24/7 with around-the-clock with 12-hour on-and-off shifts. He said it was, “eat, shower, bed and then do it all over again.”

Zacheis said spirits are high, despite the situation’s intensity. He said it was especially uplifting to hear New Yorkers at 7 p.m. each day cheering from windows and banging on pots and pans to show their appreciation for the health care workers.

“We’re just doing our best,” he said during his first week in New York. “We’ve seen a lot of teamwork. There’s a lot of communication.” He also noted they were provided donated meals and other items provided to help them settle in.

Bridget Fisher, a nurse practitioner from China, Maine, has her identification checked before boarding a DoD aircraft for a flight to New York to begin COVID-19 response operations at VA medical centers in New York City.

“Not volunteering was not an option”

Several of the VA New England staff said the DEMPS mission is an opportunity to contribute their VA clinical expertise at a critical time and at the epicenter of the coronavirus – New York City.

“As I watch the news every day and see my health care colleagues across the country caring for these very sick patients, I know I have the clinical expertise to contribute to this unprecedented pandemic,” said Margaret “Peg” Sullivan, a nurse practitioner from the White River Junction VA Healthcare System in Vermont.  “Simply, this is what I do. Not volunteering was simply not an option.”

Sullivan said everyone is “working long, difficult hours.” Both the New York and New England providers work side-by-side and are taking every precaution.

“It is an honor to serve during this pandemic,” she said. “We are not heroes. We are simply committed clinicians doing what needs to be done. We’re supporting our colleagues and patients.”

“This is a chance to give back to those Veterans who fought for the freedoms that allow me to practice as a nurse today,” said Romero.

“To serve our Veterans is an honor”

Volunteering to help fellow VA staff at the Brooklyn VA is “being there for those who are in need,” said Carolyn L. Stevens. Stevens is a VA licensed practical nurse from Lincoln, Maine, and a U.S. Army Medical Corps Veteran.

“To serve our country is a privilege. To serve our Veterans is an honor,” said Tim Chilson, a Veteran of the U.S. Navy and of the Army National Guard and Air National Guard from Florence, Mass. He has also deployed several times when on active-duty with several military deployments. Chilson is a registered nurse with the VA Central Western Massachusetts Healthcare System.

Several staff from Vermont and Maine are now helping in Boston and the nearby VA Bedford campus. The Bedford campus is now caring for Veterans from the state Veterans’ home in Chelsea, a Boston suburb.

“As I was packing up my car this morning, I couldn’t help but think of all the Veterans that I have met and taken care of in my 10 years here at White River Junction VA,” Kebalka wrote in a blog. She uses the blog to share her observations with friends and fellow VA employees. “I was thinking about how they must have been feeling on the morning of their first deployment into World War II, Korea, Vietnam, Iraq, Iran, or leaving for basic training, or any other mission that required leaving their home. I am inspired, determined and excited to use my skills toward this worldwide crisis.”

Lilly noted that his network has kept a close eye on the spread of the virus into New England. VA New England had already built contingency plans for VA providers within New England to support the expected Boston surge.

Support of COVID-19 units will be critical in VISN 1 for the foreseeable future, he said. In messages to employees, he has encouraged VA New England staff to volunteer.

“We need nurses, physicians and other clinical staff and likely other professionals from a wide range of service lines. They’re needed not just in other regions of our nation, but right here in New England, too,” Lilly said.

Any provider interested in returning to the Veterans Health Administration to help VA medical centers in New England can send a note to human resources at VHAV01NewEnglandHiring@va.gov.

Sunday, Lilly was there to tell his staff heading to New York how proud he is. He said their service was an inspiration to everyone.

“It takes a tremendous service, tremendous self-sacrifice and a willingness to serve your fellow man,” Lilly said.