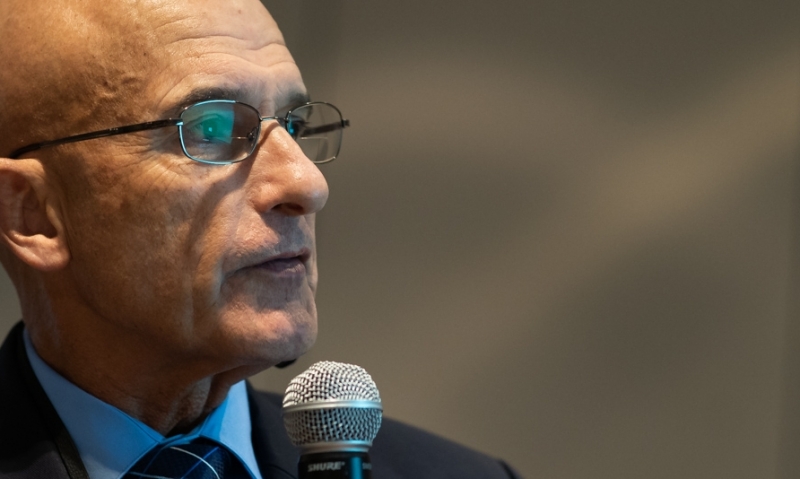 “We need to sustain this; keep your foot on the gas pedal,” said Rocke, moderator of The American Legion’s National Veterans Employment and Education (VE&E) Committee Saturday in Minneapolis during the organization’s 100th national convention. “Because if one veteran or military spouse is out of work, we still have a job to do here.”

Committee members heard from several organizations about their efforts to employ the military community, including Microsoft, the U.S. Office of Personnel Management (OPM), and Comcast NBCUniversal.

Several years ago, Microsoft looked at the number of servicemembers transitioning out of the military every year – more than 200,000 – and coupled that with the fact that there were thousands of jobs within the company that were going unfilled due to not enough people with information technology (IT) backgrounds. Moreover, retired Maj. Gen. Chris Cortez shared that 490,000 IT jobs in America go unfilled for the same reason. As a result of these IT vacancies and the number of transitioning servicemembers looking for employment, Microsoft created the Microsoft Software and Systems Academy (MSSA) program to provide transitioning military servicemembers and veterans with the skills needed to get into the IT industry as well as to benefit the company and industry nationwide.

The MSSA program launched in July 2013 at Joint Base Lewis-McChord in Tacoma, Wash. After the 18-week course, “we knew we had a program that was going to work,” said Cortez, vice president of Military Affairs at Microsoft.

The MSSA program is currently held on 14 military bases and growing. More than 1,000 servicemembers and veterans have graduated from MSSA and 94 percent are employed. Of that number, 87 percent are working in the IT industry either within Microsoft or with one of its 300 hiring partners. By 2020, Microsoft hopes to be working with 500 IT hiring partners. The program fee is $6,500, but Cortez said GI Bill benefits can be used.

“The program is working. And it’s bringing much-needed talent to the IT industry,” Cortez said. “These young men and women are awesome. They bring so much with them when they come to work, and we have to articulate that to the industry. Because up to now, they really haven’t realized the talent that’s out there of those that served, and we do and our graduates are proving it.”

Microsoft is in the process of rolling out a MSSA pilot program for military spouses.

Michael Dovilla, chief of staff for OPM and a member of Post 91 in Berea, Ohio, said veterans currently represent about 31 percent of the federal workforce, which is up from 26 percent only 10 years ago.

“OPM is working on finding ways to make better connections between the specific skillsets that our vets have as they are returning and connecting those to the specific needs that are in place within the federal government at this moment in time,” Dovilla said.

Dovilla made VE&E Committee members aware of the website www.fedshirevets.gov in hopes of energizing federal employers to seek out qualified veterans and eligible family members for employment.

Another leader among veteran and military community employers is Comcast NBCUniversal, a company of 167,000 employees with a focus on hiring from within the military community – veterans, National Guard and reserve members, and military spouses. This focus has been a foundation of Comcast since its founding by World War II Navy veteran Ralph J. Roberts in 1963.

“We work with our talent acquisition and advise them how to hire military, where to find them, how to read their resumes,” said David Gaulin, director of Military and Veteran Affairs at Comcast NBCUniversal. Gaulin and his team created an online internal tool for recruiters, hiring managers, leaders and employers to learn more about the military community, veterans service organizations, programs, different ranks within each service branch, and more.

The company also leverages its brand to support the military community in many ways, including providing free viewing of the Olympics.

With the focus on the need to continue employing veterans to contiue reducing the unemployment rate, Deputy Director of Soldier for Life Col. Tom Anderson reminded the committee that, “We are not a bunch of broken people that need scooped up off the street. That’s the narrative that is too often seen out there in the media and in the movies. What America needs to understand is the value we have as veterans and how we can continue to keep this country what it is.”

The only thing Wendy Torres remembers from her transition assistance program (TAP) experience was not to lose her DD 214. Three weeks into her new role as acting executive director for the Department of Veterans Affairs Office of Transition and Economic Development (TED), her focus is to improve the TAP curriculum to meet the needs of servicemembers transitioning from military to civilian life.

As TAP now falls under TED, Torres said the vision is to “comprehensively address military to civilian transition, providing tools and resources needed to sustain economic and dependency post transition … specifically in whole health and wellness. This is the way forward for TAP will only become one piece of the military-civilian transition.”

Torres said the TAP curriculum was revised and implemented this past April. Besides having the servicemember register into the VA health-care system during TAP, six modules are now the focus of TAP to address the questions and concerns many servicemembers have. They are:

TED’s vision is to also look at the military lifecycle, which Torres said TED is going to be responsible for managing that military lifecycle and military-civilian transition, in addition to finding opportunities for economic long-term development for transitioning servicemembers, veterans and their families. To support the military lifecycle, Torres believes it’s imperative to start educating servicemembers early on about their benefits and transition – such as on their first assignment and every time they have a permanent change of station -- instead of in their last six months of service to help them make more informed decisions as they get closer to whenever they want to separate from the military.

H.R. 5649, (retired) Navy SEAL Chief Petty Officer William `Bill’ Mulder Transition Improvement Act of 2018, was recently passed by the House. The bill will restructure TAP to require servicemembers to choose a career-oriented track that best suits their post-service plans and require servicemembers take part in one-on-one counseling a year prior to separation to help determine the path that best suits them.

“The way forward is to continue to collaborate with DoL (Department of Labor), DoD (Department of Defense), veteran service organizations and all other stakeholders as we continue to shape activities, outcome and measures for TED,” Torres said.

Legionnaire Patrick Campbell, acting assistant director for the Office of Servicemember Affairs, Consumer Financial Protection Bureau, said his division provides tools and resources to help military families manage their financial life. Campbell shared that the biggest thing that needs to be made aware to military personnel is that DoD just changed its security clearance. When Campbell was in the military he received his security clearance every five years; however, since a credit report can now be pulled quickly, DoD has gone from a periodic to a continuous monitor. “Now more than ever it is important for servicemembers to be monitoring their credit reports and dealing with any debt collectors,” Campbell said.

The American Legion’s national veteran employment awards for 2017 were presented during the VE&E Committee meeting. The recipients are as follows:

“I have to believe one of the elements of this award is that we instituted our own, The American Legion, department stand down. We are about to conduct our third,” Looby said. “It feels good but I know our homeless veterans, especially women and their family – the fastest growing homeless veteran population – it’s a tragedy. We have to wake up Congress, we have to wake up our mayors.”

“We don’t have any high profile leaders on this issue in the current administration so there are a lot of communities out there that the attention’s waning so the motivation is slipping a little bit. And that’s not a good thing. Let’s keep the pressure on,” said Monet, CEO of National Coalition for Homeless Veterans, who said on any given night more than 40,000 veterans are homeless. “Go back to your local communities and ask what you can do. Keep pointing at Congress and VA saying, ‘Hey, this is important. These are our brothers, these are our sisters, and they’re out there (on the streets) and they shouldn’t be.”