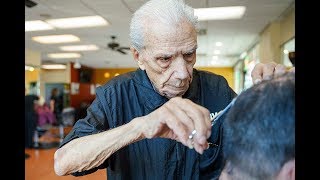 Few living people can remember a world prior to The American Legion. Anthony Mancinelli is one of them.

A Legionnaire from Post 1796 in New Windsor, N.Y., Mancinelli celebrated his eighth birthday almost two weeks before the organization’s initial caucus more than a century ago. Born on March 2, 1911, near Naples, Italy, Mancinelli lived in Europe during the duration of World War I. He moved to the United States in 1919.

Today, the 108-year-old is not only remarkably healthy, he continues to work fulltime as a barber at Fantastic Cuts in New Windsor. He is currently recognized as the “world’s oldest working barber” by Guinness World Records. He most likely is the world’s most experienced as well, giving his first haircut when Warren G. Harding lived in the White House, 97 years ago.

During World War II, Mancinelli was tasked as a company barber and supply technician. “The Army drafted me in 1944 and stationed me at Fort Lewis, Washington. I was ready to go overseas, my name was called out and they said, ‘You’re not going with us, you’re the only married person and you have two children,'” recalls Mancinelli, who was 33 at the time. “In `45, the war was over and they sent me home.”

When he owned his own barbershop in Newburgh, N.Y., he built a loyal customer base that continues to seek his services.

“He gave the best haircut,” said Ed Schlobohm, who has been a customer of Mancinelli for 40 years. “He does it the right way. He talks to you and makes you feel comfortable while you’re getting a haircut. In a short period of time, you’re finished and you’re out the door.”

Mancinelli’s son knows a 75-year-old who would regularly receive haircuts from Anthony since he was a young boy. “He doesn’t do it now because he doesn’t have any hair,” said Bobby Mancinelli, 82.

The younger Mancinelli has been driving his father to his daily shifts at the salon since he stopped driving in December at age 107. “He said, ‘My license is still good until 2021.’ I said, ‘Whose car you going to drive? You don’t have insurance. You don’t have a car!'” he recalled, half admiringly and half incredulous.

The older Mancinelli attributes his longevity to “clean living” and his work ethic. “I never thought I’d reach this age to tell you the truth…People say, ‘You’re 108 and you still work?’ I like to work. If I stayed home, I’d get old fast.”

Post 1796 Commander Tracey Lanthier recognizes the significance of having the world’s oldest barber in his post. The post held an official celebration for Mancinelli’s 108th birthday party and featured him as the grand marshal for the community’s Memorial Day parade.

Son Bobby, who served as the Post 1796 commander nine times, believes his father’s slender build has contributed to his long life. “My father jokes and says he stays thin because he eats thin spaghetti,” Bobby said. “My mother passed away 15 years ago and I figured he was going to be gone. He said, ‘I have to be working. I can’t just sit around.' And he’s been doing it ever since.”

“He just loves his job,” added Jeannie Nagrinelli, a receptionist at the salon. “He’s amazing. Everybody loves him.”

After being recognized by Guinness, media interest and international attention about New York’s most famous barber grew exponentially. Bobby believes the world is finally seeing the father that he has known and admired his entire life. “He’s a great man but he’s tough. And stubborn. And independent. He never took a pill in his entire life.”

As far as Mancinelli’s Army superiors who kept him stateside during the war, Mancinelli can no longer ask them if his advanced age at the time played a factor. They have been dead for years.