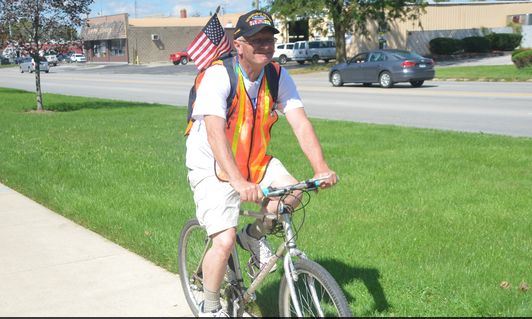 FREMONT — A former congressman who is biking and walking from Michigan to Washington D.C. stopped in Fremont on Wednesday on his trip to help support veterans and ask their state representatives to improve their health benefits.

Kerry Bentivolio, 64, of Milford, Mich., who served his country during conflicts in Vietnam and Iraq, decided to make the 570-mile trip to Washington in hopes of waking up the American people and Congress to the urgent needs of veterans in the country.

“I saw it firsthand when I was in the service. A fellow soldier died in a stateside military medical holding unit I was in and nobody noticed for four days,” Bentivolio said. “More than 300,000 American military veterans likely died while waiting for healthcare, and nearly twice as many are still waiting, according to a new Department of Veterans Affairs inspector general report.”

Bentivolio, who served as congressman from 2013 through January 2015, said talking about the issue has not gotten the veterans any closer to getting the aid they need. It is time for action, he said.

“We have a lot of World War II veterans who are dying at 80 or 90 years old, but we have Vietnam veterans who can’t make it past 70 years old. We have Marines that were stationed in Camp LaJune in the ’50s and ’60s and they found out all that water was contaminated,” Bentivolio said. “Congress said they were going to take care of these guys but they’re not.”

While at home in Michigan, Bentivolio said he realized he could not sit at home and do nothing while veterans were not given an opportunity to receive the care they need.

While on the trip to D.C., which Bentivolio said he hopes to reach in 30 days, he is talking to people he meets along the way and urging them to speak to their congressmen and women to spark change.

“Hopefully we’re going to have a lot of people gather and it’s is going to snowball,” Bentivolio said.

In Fremont on his sixth day of travel, Bentivolio said he tries to walk between 15 and 20 miles and bike another 25 to 30.

Heading east, Bentivolio will pass through Clyde and Norwalk before heading for the Akron area, where he will meet with Rolling Thunder, an advocacy group for prisoners of war and service members who are missing in action.

“I’ve just went 120 miles so a lot of that aggression has drained from my body. Every day in the morning, I wake up angry as hell because we’re more worried about 80,000 refugees coming from the Middle East and all these illegal aliens and we’re going to take care of them and give them food stamps,” Bentivolio said. “We can’t even take care of veterans who served our country. I’m just fed up.”

Bentivolio wants to put his former House colleagues to task by asking for solutions to help veterans.

“Everybody’s lives matter. We have to put our priorities right. Take care of the veterans and soldiers. If you can’t do that, don’t bother asking us to serve anymore,” Bentivolio said. More soldiers are dying from self-inflicted (wounds) or suicide than on the battlefield. It’s time to kick butt and take names.”

For more information, head to justiceforveterans.com.