High veteran unemployment appears to be in the past, but the push for more hires continues 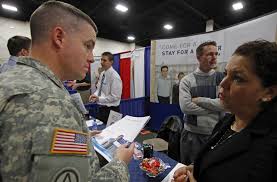 From the LA Times: