US Veterans Who Firebombed Japan in WWII Meet Survivor 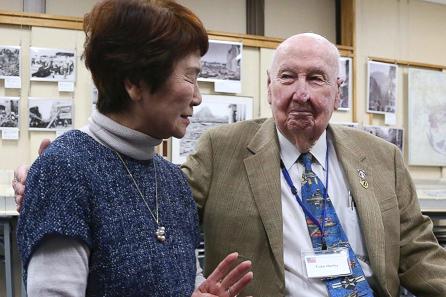 Five American veterans who took part in the firebombing of Japan during World War II saw photos of charred bodies and leveled homes Wednesday at a museum dedicated to the victims, and said the outcome on the ground of their missions was awful.

Fiske Hanley of Fort Worth, Texas, was an engineer on a B-29 bomber in the March 10, 1945, firebombing of Tokyo that killed about 100,000 people — more than the Aug. 9 atomic bombing of Nagasaki — and destroyed much of the eastern part of the city. On the ground, Haruyo Nihei was a schoolgirl running for her life.

Hanley and Nihei, now 95 and 79, met at the museum on Wednesday and celebrated their survival.

"I was up there," Hanley said, pointing his finger upward as he explained to Nihei that he was flying that night. "Awful."

Hanley stopped in front of each photo on exhibit, studying the damage and shaking his head. "Terrible," he repeated.

All five veterans crashed during the final months of the war and were taken prisoner by the Japanese.

"You're a survivor, I'm a survivor too," Hanley told Nihei.

Nihei, who survived under layers of people who fell on top of her, said she was happy the men had taken the time to see the damage of the firebombing despite their suffering during their captivity.

"I wonder if they had thought of the people on the ground when they dropped the bombs," she said. "But I'm more thrilled by the fact that we, who were witnesses of that moment in history, are reunited at this place 70 years later. They must have had mixed feelings about coming here, so I'm so glad they came."

From January 1944 to August 1945, the U.S. dropped 157,000 tons of bombs on Japanese cities, according to the U.S. Strategic Bombing Survey. The death toll from the bombings is estimated at more than 300,000, while another 15 million were left homeless.

The five veterans, who were on separate planes that firebombed different areas of Japan, are visiting Tokyo on a Japanese government reconciliation program for former prisoners of war. During their weeklong trip, they will visit the sites where they crashed and the prisons where they were held captive.

Hanley, who was a second lieutenant at 25 years old, carried out 16 firebombing and combat missions over other major cities too, including Nagoya, Kobe and Fukuoka. His B-29 was shot down over southwestern Japan 17 days after firebombing Tokyo.

Hanley and a dozen other B-29 crew members who had crashed earlier were sent to the regional headquarters of Japan's notorious Kempeitai military police, where he suffered from repeated beatings, harsh interrogations and malnutrition. The trauma, which he wrote about in a book, "Accused War Criminal," gave him nightmares for years.

Only 160 of about 250 American fliers captured by the Tokyo military police survived. Hanley was among the first to be liberated two weeks after Japan's surrender.