Coffee for People ‘Who Love America’ 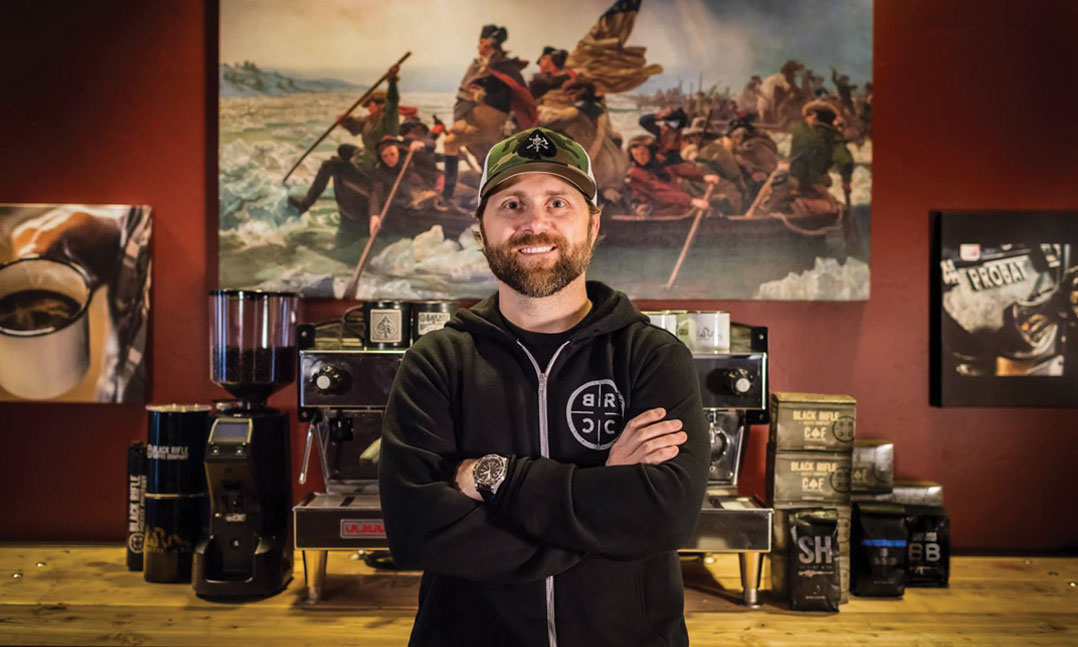 A VFW life member and former Army Green Beret who founded a coffee company led by Iraq and Afghanistan war veterans says his $30 million company will hire 10,000 qualified veterans over the next six years

One day in 2014, Evan Hafer, a former Army Green Beret and life member of the VFW Department of Texas, was instructing an advanced tactics course on a shooting range.

Along with his words of wisdom, Hafer also dispensed home-made coffee for the shooters. From roasting to brewing the coffee, Hafer did everything on site.

While making coffee, he laid down his rifle next to his coffee roaster. Hafer recalled one of the guys asking, “Are you going to start a coffee company?” He looked down at his black service rifle and coffee. Those two things gave him an idea.

Hafer laughed and told him, “Yeah, I could call it Black Rifle Coffee Company.”

Later that year, he founded Black Rifle Coffee Company in Salt Lake City. Hafer, a self-confessed “coffeehead,” said his company made more than $30 million annually the past two years.

Hafer’s love for coffee started about 20 years ago, and he started roasting coffee beans in 2006 while he was a CIA contractor.

“I couldn’t really find any coffee I wanted online that could be shipped to Iraq, so I just started roasting my own,” Hafer said. “At the time, I was doing three months there and one month home. That basically was my rotation for 10 years.”

While stateside, he developed different roast profiles and tried different coffee beans to take with him overseas. He said he would let others try his coffee, and they would give him feedback.

“I just wanted to take incredible coffee overseas with me,” Hafer said. “I’d have a coffee bar set up in my room, and everyone would come by and have some good coffee.”

Now headquartered in San Antonio, Black Rifle Coffee Company is a “lifestyle” coffee company that “serves coffee and culture to people who love America,” according to Hafer.

“But, coffee always comes first,” Hafer said. “We compel ourselves to serve great coffee to people who have taken an obligation to serve this country in a wide variety of capacities.”

“We also believe in the Second Amendment and that America is an amazing country,” Best said. “If you work hard and believe in the American dream, then you are family to us.”

Best, a former Army Ranger and life member of the VFW Department of Texas, provided more information about the company’s moniker, noting that firearms and coffee are a “natural fit.” He said coffee is a social drink that “brings people together” and service rifles are “life-saving tools” that he and Hafer carried for a decade or longer.

“It was the one thing that protected us and our brothers and sisters,” Best said. “We just wanted to put together coffee and our respect for service to this country because those are our passions. We want to inspire the veterans community and make an amazing product that brings people together.” Best served four years with 2nd Bn., 75th Rangers. While on active duty, he deployed four times to Iraq and once to Afghanistan. He, like Hafer, worked as a contractor for the CIA after being discharged from the military.

Best said he did 15 to 20 rotations to “hostile zones,” including Iraq and Afghanistan, with the agency.

To promote the company online, Best produces and directs videos that have military humor and jokes about politically correct culture. And, lots of firearms.

“The videos are very authentic in that you see who we are on screen,” Best said. “We joke around, but we are professionals. We take our business seriously.”

In 2014, Best said he started posting videos to social media to make his friends laugh. Now, he has about 1.5 million followers on Facebook and almost 900,000 subscribers on YouTube. He has also helped Black Rifle Coffee Company grow its social media presence since the beginning.

Best said the purpose of the videos are not only to promote Black Rifle Coffee Company but also to “empower” veterans.

“It’s a way for the company to provide value to people’s lives,” Best said. “Maybe a veteran moved home after the military, and he or she doesn’t have a support system. They can pull up one of our videos and laugh and remember they served with people just like us. I absolutely believe that was one of the things that helped grow the company.

“But what really retains [our] customers is quality of our products,” Best continued. “We take massive pride in the quality of beans, packaging and customer experience.”

Creating Opportunity
As of December, 55 percent of people employed with Black Rifle Coffee Company are veterans. Hafer said his company is unique because many non-veteran employees have to assimilate to a veteran culture rather than veterans having to acclimate to a “corporate environment.” Hafer said many veterans have a difficult time transitioning to civilian life because of the culture change.

“Veterans have a very high success rate when it comes to starting and running businesses,” Hafer said.

“But, they fail at working for other companies at a higher rate. That tells me that we, as a subculture, have to help one another and create opportunities for people to fit in more appropriately.”

Best said the “No. 1” reason he loves working at Black Rifle Coffee Company is being surrounded by peers.

“I remember when I got out of the military, I had a very challenging time because I went to work for corporate America,” Best said. “I couldn’t tell a war story, and I couldn’t vent in the way military people do. But, I can do that now.”

Expanding for the Future
In August, Black Rifle Coffee Company added a roasting facility in Manchester, Tenn. Amanda Higgins, a member of the VFW Department of Tennessee and a lieutenant colonel in the Tennessee Air National Guard, is the general manager of the new facility.

“Working with veterans is great,” Higgins said. “We all speak the same language, but I would say we are very inclusive to everyone. We don’t exclude all the hard work of the non-veteran employees here.”

Currently with the 118th Wing at Berry Field Air National Guard Base in Nashville, Higgins joined the Air Force in 2000 and was on active duty for 10 years. During that time, she was a weapons system officer on board F-15s. She deployed to Qatar in 2004 and Afghanistan three times. In total, she amassed 1,300 flying hours, including about 300 in combat. Higgins said she believes that Black Rifle Coffee Company is a great place to work because a lot of the people who work there have a “military mindset” for finishing tasks.

“Everyone who was in the military was, at one time, at the bottom of the totem pole, and we all had to work our way up the ranks,” Higgins said. “We are all willing to roll up our sleeves and say, ‘This isn’t in my job description, but I’m willing to do it,’ because it furthers the mission.”

‘10,000 Veterans’ by 2024
The plan for the Manchester roasting facility, ironically located in Coffee County, Tenn., is to create 52 positions over the next five years. With the new expansion, the established roasting and screen printing facility in Salt Lake City and the headquarters in San Antonio, Hafer said he now has the infrastructure for the company’s next step. He said he wants to give qualified entrepreneurs the opportunity to own and operate a retail store.

“We are going to select highly qualified and motivated veterans to own and operate their own Black Rifle Coffee shops,” Hafer said. “It’s not going to be for everyone or anywhere. It’s going to be a very rigorous selection process. At the end of all this, my goal is to hire 10,000 veterans.”

Hafer also said that having veterans work for Black Rifle Coffee Company has added value to the company. An example he gave was when the Manchester facility opened in August.

“I was there to raise the U.S. flag, and the majority of the people there knew how to conduct the ceremony correctly and how to fold the flag,” Hafer said. “There was a group of people around the flag saluting it with respect. They take it down, fold it and put it away every evening. It makes me proud as a business owner to know that they take pride in their business, service and our country. Veterans have absolutely made this company better.”