They are not forgotten 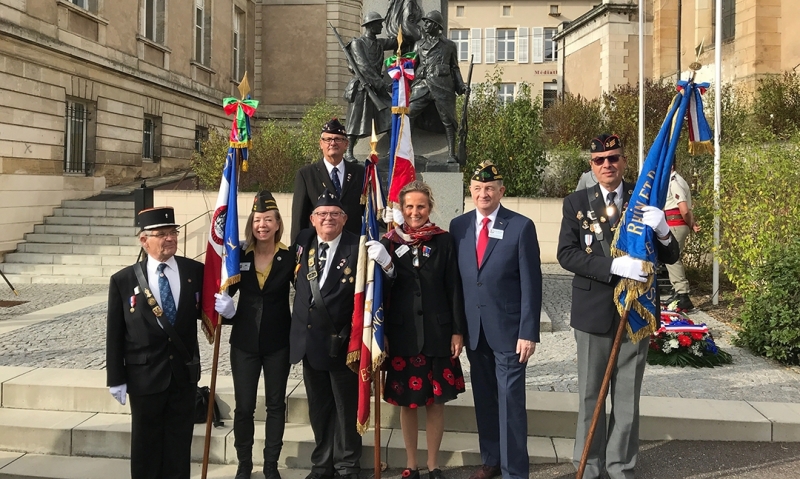 By Jack Monahan for the Legion

I returned on Sept. 25 from a six-day visit to the Lorraine region of France, where the major battles that ended World War I were fought by the American Expeditionary Forces (AEF) of the U.S. Army in 1918. I was honored and privileged to participate in a number of events, visits and ceremonies marking the centennial of the major U.S. engagements at Saint-Mihiel and Meuse-Argonne, and to meet with numerous local officials and dignitaries, as well as with many American soldiers – from general officers to privates – who were there for the commemorations.

My first visit on Thursday, Sept. 20 – a visit which for me was a matter of personal duty – was to the town of Seicheprey to meet with the mayor, Gerard André. The town was the scene of a horrific battle in April 1918, one of the first fought by the AEF, which resulted in the deaths of 84 Connecticut soldiers of the 102nd Infantry Regiment, 26th “Yankee” Division. It is a place which still resonates in Connecticut history and is sacred to the memory of those who died. The town has a beautiful monument to the French and American soldiers. It also has a granite fountain with a bronze plaque inscribed with a dedication to the Connecticut soldiers, donated by the citizens of Connecticut to the village. It is a point of pride for the mayor and the residents and is meticulously maintained.

The next day, Friday, Sept. 21, I toured the battlefield at Verdun, scene of the horrific 1916 battle, including the fortress at Douaumont, the battlefield museum, and the memorial and ossuary, where the skeletal remains of the thousands of soldiers killed in the battle who could not be identified are deposited. I also visited Verdun City Hall, met the mayor and visited the city’s “Hall of Honor,” where artifacts and historically significant documents of the city are displayed. Among the displayed artifacts is a treasured Certificate of Appreciation and Friendship from The American Legion, given to the citizens of Verdun by National Commander Howard P. Savage during his visit there in 1927. I also visited the impressive American memorials at Montfaucon and Montsec.

Saturday, Sept. 22, was devoted to the commemoration of the Battle of Saint-Mihiel, the first fully American engagement of the war. The day commenced with a ceremony in the town of Thiaucourt. A wreath-laying ceremony was led by local dignitaries. A French army band and a troop unit from the local logistics regiment participated, as well as a substantial U.S. contingent, including the 1st Infantry Division’s “Doughboy” Color Guard, a contingent of soldiers, Marines, sailors and airmen, as well as a marching contingent of soldiers bearing the flags of all the U.S. divisions that fought in Lorraine in World War I. Following the ceremony in town, the entire contingent – including French veterans carrying their unit colors – and local residents marched from the town to the American cemetery at Saint-Mihiel. A memorial ceremony was conducted there on a bright sunlit day. The graves of the 4,100 soldiers buried there had each been marked with both a French and a U.S. flag. Many graves had pictures or documents posted as well. Hundreds attended the solemn and beautifully fitting ceremony, including local citizens, officials and dignitaries. Large contingents of U.S. Armed Forces personnel and French soldiers participated. The U.S. Navy European Command band played, as well as a French army band. U.S. Gen. Scaparrotti, commander, U.S. European Command, and French Gen. Lillo, corps commander, gave remarks. A flyover by U.S. F-15 fighter jets in “Missing Man” formation occurred. Wreaths were laid by the senior officials. I had the honor to lay a wreath on behalf of the U.S. World War One Centennial Commission. I was profoundly moved by the entire scene and ceremony, a display which demonstrated beyond any doubt that the deeds of the Americans who fought and died for liberty in 1918 are not forgotten, neither by us nor by the French people.

Sunday, Sept. 23, was devoted to the commemoration of the Battle of Meuse-Argonne. During the day’s 24 hours, the names of the more than 14,000 soldiers buried there were read. I attended a ceremony at the American cemetery, the largest of the World War I U.S. cemeteries, in the afternoon. A similar ceremony to that at Saint-Mihiel was held, though due to a driving rain, the ceremony had to be moved inside to the cemetery chapel. The chapel is decorated with stained glass windows depicting the unit crests of all the U.S. Army divisions that participated. That evening candles were placed on the graves, and the reading of names continued through the night.

That morning, I had participated in a visit to the Argonne Forest, where an incredible trail through the battlefield area has been laid out by the French National Forests Office to commemorate the Americans. The trail system project was among the most moving things I observed during my visit, not least because of the massive expenditure in resources and time that had been devoted to it, but also because the project had clearly been one that came from the hearts of those who envisioned it. It was conceived by Daniel Georges, a forest warden for nearly 40 years and supervisor of the national forests in the Argonne. A highlight of the trail system is a space where 1,700 trees have been planted in the shape of the 1st Division “Big Red One” insignia. Douglas firs and sequoias for the shield, and red oaks in the shape of the Big Red One, pay homage to the 1,700 soldiers of the division who died in those woods in October 1918.

I was deeply moved by the events I attended, and by the interactions I experienced with both French and Americans over the course of my visit to Lorraine. It was the experience of a lifetime. I was proud to have had the opportunity of representing the United States and The American Legion at the events in France commemorating the historic battles of Saint-Mihiel and Meuse-Argonne. It was a powerful reminder to me of the sacrifices made by the doughboys during the crucible of battle – and of the powerful forces, both good and terrifying, which would shape the values and attitudes they would later imprint upon the organization they would create, The American Legion.

Jack Monahan, a member of Post 18 in Essex, Conn., is The American Legion’s representative on the U.S. World War One Centennial Commission, and serves on the Legion’s National Finance Commission.