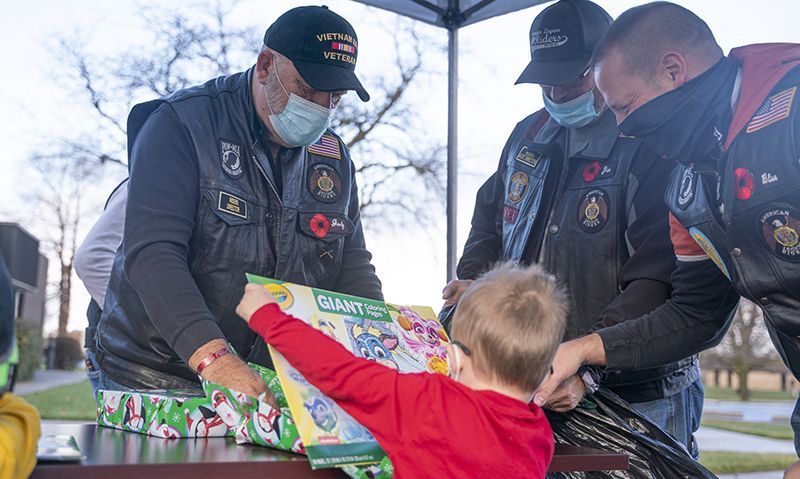 As the rains stopped and the sun came out on Dec. 11, vehicle after vehicle pulled up to a table and canopy stationed outside of Choices Coordinating Care Solutions on the northeast side of Indianapolis. Out of each vehicle either came children, adults or both – to collect what was an early Christmas, courtesy of American Legion Riders Chapter 341 in Cicero, Ind.

For the second straight year ALR Chapter 341 provided Christmas presents for area foster children. A year ago it was 31 children; this year 33 children found themselves on the receiving end of Chapter 341’s generosity, ranging from ages 2-19.

In the midst of a pandemic in a year full of uncertainty, sacrifice and loss, Choices Foster Care Director Reba James said Chapter 341’s gesture provided both joy and relief.

“I think people are shocked and amazed and so appreciative knowing that all of our kids are totally taken care of for Christmas,” James said. “Especially during COVID, and with all the different families that are in need … it’s been hard to cover everyone. To have this happen for our families so we don’t have to worry about them is just amazing. We are so thankful, and our foster parents are thankful.”

James and her staff solicited individual wish lists from each of the children; Chapter 341 spent $100 per child. In 2019, the children were able to open the presents inside while American Legion Post 341 Legion Family members watched, but COVID-19 moved this year’s effort to a drive-thru outside of Choices’ facility. A table was set up so that the children could open their presents while the Legion Riders – all clad in masks – could see the reactions their effort generated.

“It’s a blast,” Chapter 341 Director Jody Brown said. “When we come here to give the gifts out and see the expressions on the kids’ faces, the smiles, and knowing we’re helping to support the parents by helping them with their foster children, it’s great.”

Past Chapter 341 Director Dave Baughman said a fundraising ride brought in more than $5,000 to fund this year’s gift giveaway and get started on what will be a similar effort in 2021.

“It’s very rewarding,” Baughman said of the effort. “These kids were in situations that I can only imagine. Being able to help those kids and the foster parents is a no-brainer.”

In addition to shopping for all the presents, Chapter 341 Riders get together to wrap all the presents. “We’ll have 25 to 35 of our Legion Riders all in there trying to wrap Christmas presents,” he said. “Most of us don’t know what we’re doing. It’s just a lot of fun.”

James said this year’s donation from Chapter 341 has been especially timely. “We’ve had some really crisis kinds of situations happen with our families,” she said. “Just recently, one of the families that was going to be coming today, the foster father was in an accident and was killed. I was emailing back and forth with the foster mom last night, and she’s not in any position to go get Christmas for the kids. She is so appreciative of this, knowing the kids are going to be getting these gifts and she doesn’t have to worry about that.

Brown also realized the importance of continuing the effort this year. “Some of these parents may have lost jobs. They’ve lost income,” he said. “We were able to rally some of our folks to raise enough money to help them out."

Chapter 341 was started six years ago and has made a name for itself through its support for various causes, including The American Legion’s Operation Comfort Warriors, a local victim of a school shooting, and the daughter of a disabled veteran in need of a service dog.

Brown, whose tenure of chapter director ends this month, said being a part of Chapter 341 “is amazing. I put this chapter together six years ago … with nine guys. Now we’re up to about 70 members. And not to sound cliché, but we’re so much like a family. It’s just been exciting. And I think we’ve raised in excess of $80,000 in the six years we’ve been chartered. I’m just very proud of our group and what we’re able to accomplish. Our guys have big hearts, and they’re eager to help.”