Preserving the History and Traditions of the Fire Service 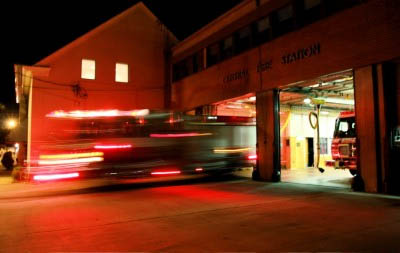 Founded in Wisconsin in 1961, the Hall of Flame Museum of Firefighting has resided here in Phoenix since 1974 ,along East Van Buren near the Phoenix Zoo, the ASU baseball stadium (Phoenix Municipal) and the Salt River Project building. Devoted to preserving the history and traditions of the fire service, the museum is home to more than a hundred pieces of larger apparatus.

Exhibits range from a basic English hand pumper built in 1725 to a spectacular hand pumper built in Philadelphia in 1844 that spent its career in Pawtucket, Rhode Island, and a parade carriage built in New York in 1870 that represented the Hotchkiss Fire Department of Derby, Connecticut, but looks more like what Cinderella rode to the ball in. From the era of the motorized fire engine, there’s a 1919 Mack bulldog army truck converted into a fire truck by the fire department of Baltimore, Maryland by the addition of a previously horse-drawn ladder wagon and a chemical cart.

The Hall of Flame is home FDNY’s Rescue 4, which responded to the World Trade Center in Manhattan on September 11, 2001, and whose entire crew was lost in that disaster. Another emotional exhibit is one of the two transport buggies which carried the Granite Mountain Hotshots of Prescott, Arizona to the Yarnell Hill Fire of 2013, resulting in the loss of 19 members of that crew.

The Hall of Flame has a video theater, also home to a fine collection of antique helmets from around the world; a Hall of Heroes memorializing firefighters who have died in the line of duty or been decorated for bravery, and a wildland gallery devoted to smokejumpers, hotshots and firefighting aviation. There’s a hand-on children’s activity area, and, in Gallery 2, possibly the museum’s most well-loved piece: a 1951 American La France from Miami, Arizona that kids (and grown-ups) can climb aboard and play on.

New exhibits have been added since the closure for the COVID-19 pandemic, including a display depicting the evolution of EMS equipment in the Hall of Heroes, a display on the firefighting comic strip Smokey Stover, and an 8-to-1 scale model of a 1933 Ahrens-Fox C-T-4 pumper. At the entryway to Galleries 3 and 4 is a new computer station allowing quick and easy access to information on the Hall of Flame’s 7,000-strong collection of firefighting arm patches.

Along with these improvements, the Hall of Flame has also been attempting to increase its virtual profile, by presenting the collection through the Hall of Flame YouTube Channel, offering both video “tours” of many of the most prominent exhibits, and by continuing its educational mission with many story time videos of classic firefighting children’s stories like No Dragons for Tea, Hercules, Bravest of All, among many others. Some of these stories, notably Curious George and the Firefighters and Pink Fire Trucks, are available in Spanish as well. These videos are available for free on the Hall of Flame Museum’s YouTube Channel, as a homeschooling option in history or science.