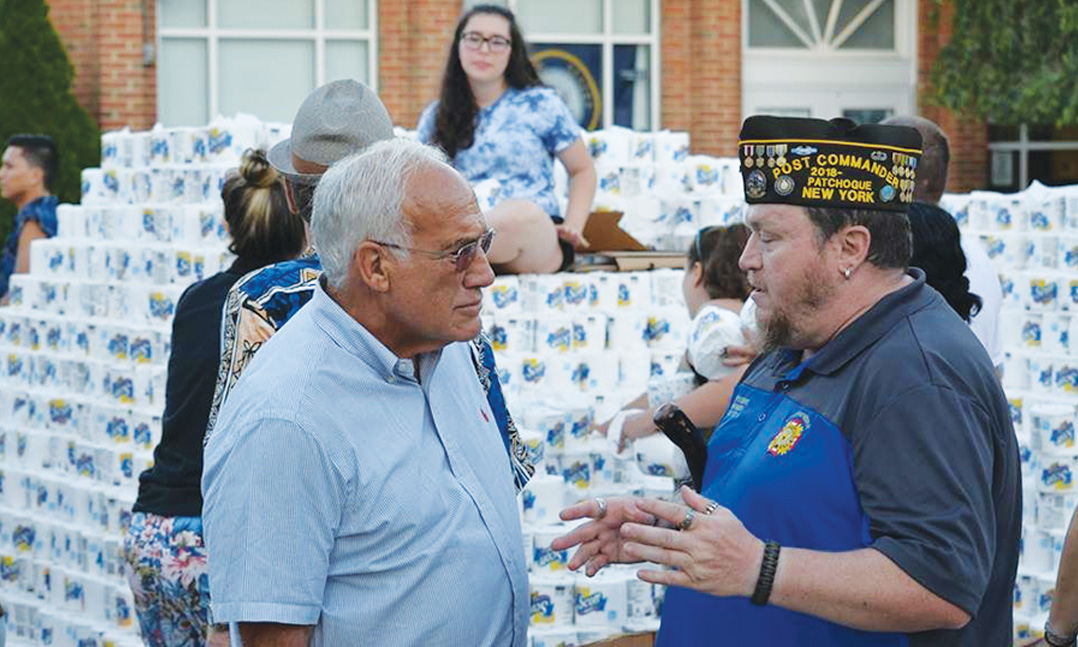 When members of Post 2913 in Patchogue, N.Y., sought to build the world’s largest pyramid of toilet paper, they took to social media to spread the word.

The end result was 15,000 rolls of toilet paper donated and distributed.

According to Post Commander Dave Rogers, 3,000 rolls went to a battered women’s shelter, and the remaining 12,000 were donated to homeless veterans shelters.

Rogers said it was brought to his attention that there is no funding for basic toiletry items for those living in homeless shelters.

Together with organizations comprising the United Veterans of Patchogue, Post members took action. Rogers sent more than 800 emails, made 200 phone calls and visited more than 100 businesses.

Members also launched individual efforts, like standing in front of supermarkets and asking people to donate to the project.

“This is the heart of what the VFW is about,” said Rogers, who served in the Army during the 1991 Persian Gulf War and later in Bosnia in 1997. “Not waiting for others to fix the problems, but getting our hands in there and making things happen.”

While his Post did not beat the world record of 25,585 rolls needed to build the world’s biggest toilet-paper pyramid, Rogers said everyone involved was pleased with the end result. Several VFW Posts as well as American Legion posts, church groups, Scouts and businesses contributed.  Rogers added that without the use of social media, it would have been much more difficult to spread the word. Two years ago, Rogers started building his Post’s social media outlets — specifically Facebook, Twitter and Instagram — to distribute information, notices and updates about the Post.

“We had a Facebook page, but no one ever did anything with it,” he said. “I decided I would take it over, so I just ran with it. It’s been going great. It’s done a lot for our Post.”

For the members who don’t use social media, they still receive letters and flyers in their mailboxes.

“I think the trick is to find that balance,” Rogers said. “The last thing you want to do is alienate someone.”

Rogers said that he uses the hashtag #vfwpost2913 to help his social media posts reach the full audience. He also is diligent in “tagging” sponsors and businesses as a way to thank them and draw attention to their generosity. Most importantly, Rogers said that using social media lets the community know that VFW Post 2913 is out and about doing good things.

“I had a guy walk up to me at an event and tell me he had seen us online,” Rogers said. “He wanted to join our Post because of everything he had been seeing.

“Social media has allowed people to know where our members are going to be and what we have going on.”

Rogers said that because of social media, the Post had its best year in 2018 with Buddy Poppy distribution. Another example of putting social media to work is when they collected 500 pairs of shoes for homeless veterans.

“Social media does work when used appropriately,” Rogers said. “It encourages people to get involved. And none of what we do would be possible without community support, and a lot of the community is focused on social media.”

He added that he still prints flyers to promote events, but that he doesn’t have to print as many since one social media post can reach 500 people.

“The other really positive thing about all of this is that it gives us the opportunity to share and receive new ideas,” Rogers said. “And sometimes we could all use new ideas to keep growing."

This article is featured in the March 2019 issue of VFW magazine, and was written by Janie Dyhouse, senior editor for VFW magazine.