'The Solitude was Wonderful' 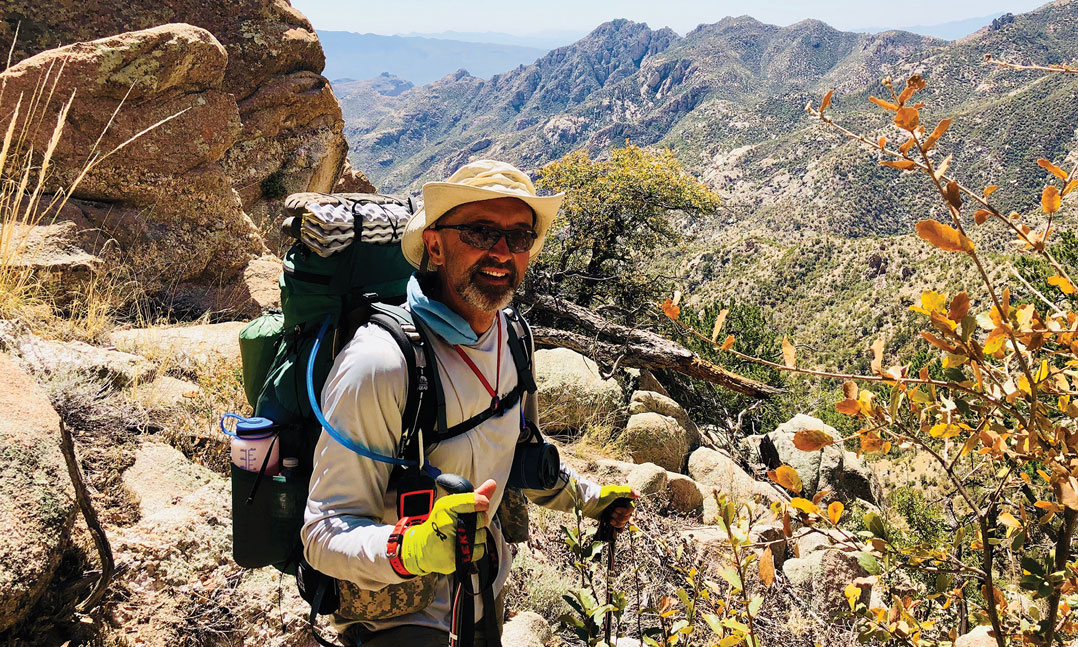 After a 32-year Army career, this retiree hiked 800 miles across Arizona last year, helping him transition to the civilian world.

Mike Buckley served 32 years in the Army, complete with six deployments and three combat tours. He watched men die in Afghanistan and Iraq. Four of his friends committed suicide.  Through it all, Buckley refused to take medication to manage what he had witnessed. Instead, he turned to nature.

“Sometimes it seems like things are kind of a swirl… [In the desert], there’s no swirl out there,” said Buckley, who hiked from March 28 to May 22 last year on the Arizona Trail — traversing 800 miles across the state — in a venture organized by the veteran-owned nonprofit Warrior Expeditions.

“I realized the significant therapeutic effect of spending all that time hiking in nature,” said Gobin, who served in Iraq (2003, 2005) and Afghanistan (2011) as an armor officer with the 2nd Tank Battalion.

It wasn’t until after his first-hand experience that Gobin began looking into research and background on the benefits of immersing oneself in nature.

A 2015 study conducted by Shauna Joye and Zachary Dietrich of Georgia Southern University investigated how “long-distance hiking and paddling” affected the mental health of 31 veterans.

“Our wilderness therapy program showed promise as a way for veterans to address issues related to experiencing traumatic events while deployed,” Joye and Dietrich concluded. “We found significant decreases in general anxiety, anxiety related to fear or uneasiness when in new places and around crowds and feelings of wariness or self-consciousness around others.”

University of Michigan professors Jason Duvall and Rachel Kaplan studied in 2013 the benefits of such experiences among veterans and also found it beneficial. They found that participants “were much more likely to report significant improvements” in psychological well-being, social functioning and life outlook one week after the program.”

“In many cases, these improvements were substantial, with the magnitude of change often 1.5 times that of participants’ reporting less serious health issues,” Duvall and Kaplan stated.

The professors did note that a small sample size — 73 veterans participated in events during the study, but only 31 provided follow-up responses — does not clearly indicate if the improvements are sustainable.

“However, the findings with respect to the reduction in perceived stress and negative affect, as well as the increases in feelings of tranquility and social functioning, suggest such benefits might persist and even continue to increase for several weeks after the intervention,” Duvall and Kaplan stated.

Confronting a Stigma
As of Aug. 1, Buckley had been retired for one year, and he said it had been a difficult “year.”

“It was harder than I thought it’d be… [You’re] transitioning to a culture you, frankly, don’t fit into,” he said.

Buckley said he started having panic attacks in 2010, after leaving Iraq. But Afghanistan, he said, was worse.

“It was the culmination of the whole year,” said Buckley, an at-large member with VFW’s Department of New York.

Buckley said there is a “huge stigma” in asking for help, and people in his situation “don’t want to be weak.”

The Army veteran became aware of Warrior Expeditions through Facebook and sent his information in for consideration. Though he initially wasn’t selected, an opportunity later arose to hike the 800-mile trail across Arizona. Buckley said he wanted to participate on the hike because he knew it was an “alternative” treatment.

“I don’t want to be addicted to the pharmaceutical industry,” Buckley said. “[They] treat a symptom, they don’t provide treatment to the underlying cause.”

The biggest challenge during the hike, according to Buckley, wasn’t the solitude, but, rather, swollen ankles and the Arizona heat. The trail provides two choices, he said — “move forward or quit.”

“The solitude, truthfully, once I locked into it, was wonderful,” Buckley said.

Buckley’s experience also supports other research from Joye, Dietrich and Joseph Amos Garcia, which specifically looks at Warrior Expeditions participants and was published in 2015 in the Journal of Experiential Education.

“The isolation of the trail gave time for respondents to contemplate what they wanted and needed for their future well-being,” Joye, et al. wrote. “Although their goals were vastly different, all respondents made decisions to improve their lives and were confident that they would follow through with their decisions.”

Becoming One with Nature
But for Buckley, his most vivid memory was the “absolute primitive” austerity and beauty of the trail itself. The first 500 miles, according to Buckley, consisted of six different mountain ranges.

“It is truly astounding,” Buckley said.

What brought Buckley peace from the hike was the calmness and breathtaking moments he experienced — like when he walked up on a desert fox that just looked at him, then went back to its own business.

Gobin said there are three elements related to the programs Warrior Expeditions offers — a chance to separate themselves from their service, camaraderie of other veterans and community support.

“First is just having eight hours a day of hiking, biking or paddling for months on end in nature,” Gobin said. “It gives our vets time and space to decompress from their wartime experiences.”

Being surrounded by fellow veterans who can relate to what each other has gone through — or is going through — is “really beneficial,” according to Gobin. Group sizes range anywhere from two to 10, depending on the type of trail.

“Since you’re spending so much time on the trails, it’s like a deployment,” Gobin said. “[The people you’re with] become as close as family.”

Community support throughout the journey also “re-establishes the basic faith in humanity that veterans tend to lose” after experiencing a combat deployment, Gobin said.

“[Veterans] tend to have a really cynical view of people and society and humanity,” Gobin said. “[The expedition] breaks that cycle of isolation and helps reconnect veterans to communities.”

Social interaction was a key component of the experience, Joye and Dietrich found.

“Not only did respondents mention their relationship with their fellow warrior hike hikers, but they also mentioned the friendship and bonding they experienced with strangers along the trail,” Joye, Garcia and Dietrich wrote.

A friend told Buckley the trail does not give people what they want, but what they need.

And for him, that rang true.

“The emotion thing kind of rolls on you,” Buckley said. “It happened to me multiple times. It becomes very raw.”

This article is featured in the February 2019 issue of VFW magazine, and was written by Kari Williams, associate editor for VFW magazine.