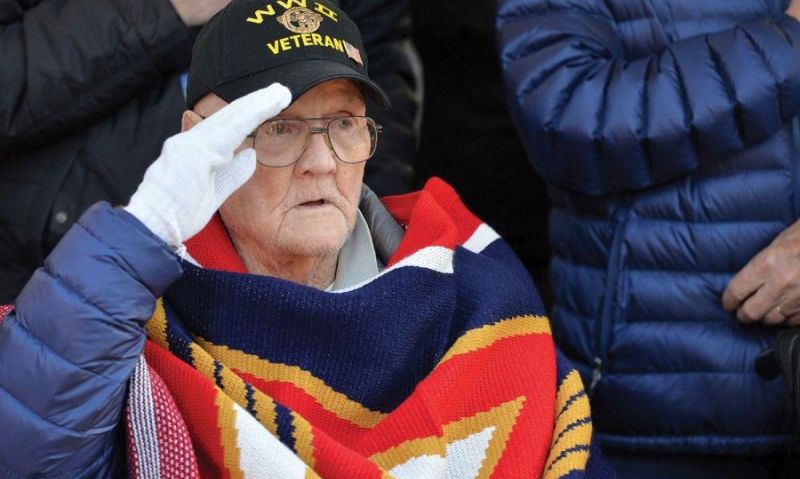 (Photo by Michael Abrams/Stars and Stripes)

By Karin Zeitvogel/Stars and Stripes

Dozens of American veterans in their 90s returned Sunday, probably for the last time, to attend ceremonies to honor them in the village in eastern Belgium where they fought in the Battle of the Bulge 75 years ago.

Herb Sheaner, who was 19 when he fought here in December 1944, helped dedicate a monument in St. Vith to the thousands of soldiers like him who were captured by Nazi troops in the opening days of the turning-point battle, which then-British Prime Minister Winston Churchill called America’s greatest during World War II.

“I was two years out of high school. At that age, you want to feel good,” he said at the dedication ceremony in a small park on the banks of the Our River.

Instead, Sheaner was one of thousands of American troops taken prisoner by the Germans in one of the largest mass American surrenders since the Civil War.

Sheaner was an infantryman in the 106th Infantry Division, which had deployed to the St. Vith area, near Belgium’s border with Germany, less than a week before the Germans launched their last major offensive on the Western Front on Dec. 16, 1944.

Made up mainly of inexperienced soldiers with little training, the 106th “ended up absorbing the central load of the German attack,” said Doug Mitchell, a former Marine who was one of the driving forces behind the prisoner-of-war monument.

“The Germans were going to put artillery on us and we couldn’t do anything about it,” Sheaner said. “We had no defense. We hadn’t eaten for five days. So we surrendered.”

World War II veteran Herb Sheaner talks about his experience during the Battle of the Bulge, before a ceremony in the St. Vith, Belgium, district of Schoenberg, where a monument to World War II prisoners of war and missing in action was dedicated, Sunday, Dec. 15, 2019.

Days earlier, Lt. Lyle Bouck celebrated his 21st birthday “shoring up his injured men in the cafe in Lanzerath,” a village near St. Vith, said his daughter, Diane, from Colorado, as she waited for a ceremony to begin at another monument to allied soldiers who fought in and around St. Vith.

After holding off 500 Germans for 20 hours on the first day of the battle, Bouck and his unit of 18 men from a reconnaissance platoon attached to the 99th Infantry Division, plus three forward artillery observers, were taken prisoner by the Germans. A fourth artillery observer was the only American who died in the fighting. Bouck’s men killed 92 Germans.

Bouck’s unit and many of the other Americans who were captured by the Germans in the Battle of the Bulge survived the POW camps, “despite enduring the most severe circumstances,” St. Vith Mayor Herbert Grommes said in a speech at the POW memorial.

“The intent of this memorial is to keep the memory of these brave men alive so that we never forget that the price of peace and freedom is very high,” Grommes said.

St. Vith “is where the Bulge broke when the Germans overran the town and captured 8,000 Americans from the 106th,”said Andy Biggio, a Marine who brought 17 veterans, many of them in wheelchairs, from the U.S. to Belgium to mark the anniversary of the start of the landmark battle.

After flowers were laid at the base of the memorial and the speeches drew to a close, the elderly veterans, bundled up against the cold, bitter wind, saluted and sang softly as a brass quartet played “The Star Spangled Banner.”

The group of veterans who make the trip to Belgium for the 80th anniversary of the Battle of the Bulge is expected to be far smaller than the 80 who came this year, said former Marine Scott Huesing, who served in Afghanistan and accompanied the elderly veterans along with Biggio.

“We have to be honest about their and our mortality,” he said. “There probably won’t be an 80-year commemoration with the veterans.

“But the constant in war is the people,” Huesing added. “The Belgians want to keep the memory of these men alive. In my war, … in these 95-year-old men’s war, we remember the people, the children and to have a reunion with them all these years later is remarkable.”

Belgians gave a warm welcome to the veterans who returned for the anniversary events, treating them as if they were still the fresh-faced, young men who fought in the Ardennes 75 years ago.

“This is a very moving experience, very heartwarming,” said Bob Weber, 95, who fought in the battle with the 10th Armored Division.

“It’s incredible how these people remember and how they’ve educated the younger generation to appreciate it just as much as the old folks. You don’t only see elderly people out on the streets clapping for us, you also see their children, their grandchildren.”