Future VFW Commander-in-Chief Bernard W. “Pat” Kearney was determined to make sure the original GI Bill came to a vote in May 1944. Kearney, then a representative of New York’s 32nd District, knew the salvation of the bill was in the hands of Rep. Frank Gibson, of Georgia. But there was a problem. Gibson was not in D.C., and nobody knew where he was.

Kearney, a WWI veteran, was traveling at the time and had to return to Washington by 10 a.m. the next morning. Kearney ordered his staff to notify Gibson by telephone in Douglas, Ga., but the Georgia congressman could not be reached. 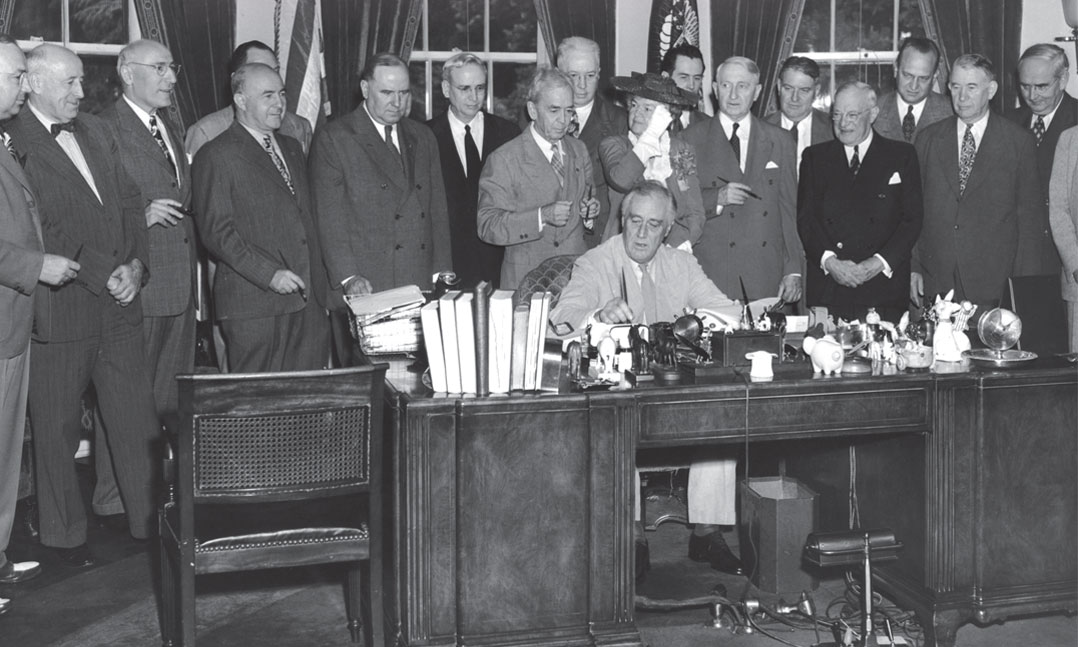 Calls went out to radio stations asking for on-air pleas to locate the congressman. Georgia State Police monitored roadways, but throughout the day and into the night, Gibson was nowhere to be found.

At 11 p.m., the missing representative pulled into his driveway and heard the telephone ringing incessantly. The voice at the other end briefed him about the situation and told him to get ready to return to Washington. He arrived in D.C. at 6:37 a.m. the following morning.

By 10 a.m., he entered the House conference room and said: “I’m here to lick anyone who tries to hold up the GI Bill of Rights. Americans are dying in Normandy — I’m going to expose anyone who doesn’t vote for the GI Bill.”

It was then, that the House unanimously approved S. 1767 (the Senate had previously approved it unanimously). On June 22, 1944, Franklin D. Roosevelt signed the bill into law. But the accomplishment wasn’t without hurdles.

The American Legion and the VFW differed in their approach to what became known as the Servicemen’s Readjustment Act of 1944, or the GI Bill of Rights. Fearing a single package of benefits would never make it through Congress, VFW favored handling various benefits one at a time and routing them through separate congressional committees. At VFW’s national encampment in 1943, Resolution 374 was adopted, calling for the nation to “provide college or trade education at government expense for those veterans of World War I and those veterans whose education was interrupted, interfered with, or delayed by war service.”

Sen. Bennett Champ Clark (D-Mo.) sponsored the proposal — the first education bill put forth by a veterans organization. Meanwhile, the American Legion crafted its own legislation — an omnibus bill that included every benefit believed was due to WWII vets.

Omar Ketchum, then-VFW National Legislative Service director, and others feared that the broad scope of educational benefits that the Legion proposed would consume funds needed for other types of compensation. Rep. John Rankin (D-Miss.) balked and the GI Bill stalled in committee.

After further weeks of wrangling over the educational provision, the bill was ready to be reported out of the seven-man House committee — but only if they could resolve the controversy over the unemployment section.

And this is how Gibson’s frantic trek back to Washington began. The vote was 3-to-3 by committee members. Gibson, the seventh member, had gone home. He left Rankin to cast his proxy ballot in favor of having veterans job placement overseen by a board headed by VA.

On June 8, the committee voted again, but Rankin refused to cast Gibson’s proxy and the issue was deadlocked.

“Whether it was the Montgomery GI Bill, the Post 9/11 GI Bill, or now the Forever GI Bill, the VFW has been at the forefront in making sure our service members and veterans receive the educational benefits they earned,” Murray said. “The VFW will continue to make certain VA education benefits continue to be protected and enhanced so future generations can achieve their post military educational goals as millions of veterans have done for the past 75 years.”

This article is featured in the 2019 June/July issue of VFW magazine, and was written by Kari Williams, associate editor for VFW magazine.